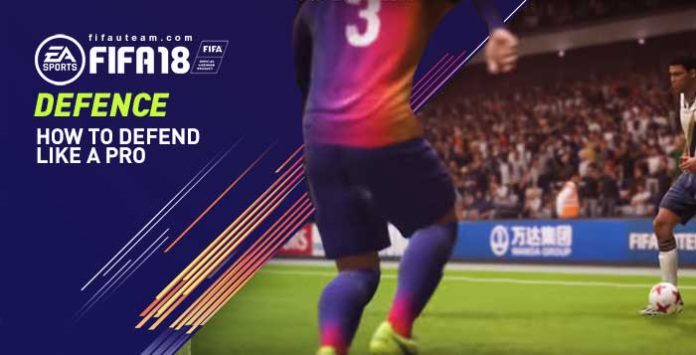 Welcome to a new lesson of drpoplove. Today, he will teach you how to defend like a pro in FIFA 18.

Improving your defending skills in FIFA 18

Hey comrades welcome back to my FIFA 18 Academy! Today’s topic is the number one “difference maker” between good players and great players.

As always, this post has a video portion you can watch below. I highly recommend checking it out for this lesson to help you follow along with the text.

Now let’s talk about defending in FIFA 18, it’s both easier and harder than it looks.

Ok, let’s think backwards here. When you attack, often times you look for that awesome through ball that will give you an easy goalscoring chance. When you find one, it’s usually an attacker that’s about to overtake the defensive line.

This is what you must prevent from happening when you’re on defence!

The AI is good at maintaining shape, not at tracking runs, so enemy attackers will run past your defenders very easily. For example, if you see a striker about to run past your center back, switch to that defender and manually track the run. In most cases, it’s okay to divert attention from the ball carrier in that moment, since they’re also looking at the same run.

Your priority is NOT to constantly chase the ball carrier. That’s the biggest “secret” I can give you. You can’t think of FIFA defending like real life defending.

Priority 2 – Protect The Middle Of The Pitch

It’s always easier to defend someone going wide into the corner than to defend intricate passes and touches in the middle of the pitch.

Even if the attacker has Ronaldo, what the hell could they possibly do when they’re stuck out wide? They can try to dribble you out (don’t overcommit), cross/cutback if there’s space (stay tight on them), or pass back.

In the middle of the pitch, they can dribble you out, making passing triangles, play one twos, do through balls, do high through balls, shield in on order to let runners pass by, trigger manual runs, pass back, pass wide, attempt long shots, and more.

That’s why it’s so important to maintain your shape as much as you can and have as many bodies in the middle as your formation allows. For example, if you play a flat 4 4 2, often times you’ll need to pull back one of your strikers to help cover the middle if you go up against a 433 or 4231.

You’ll notice that most players don’t play wide, instead they zig zag across the middle of the pitch. This is actually really easy to defend, you just stick with one midfielder and cut out the most dangerous looking pass.

Usually this passage of play manifests itself as a CM or CDM trying to get the ball to a striker. They can’t do this in a straight line, so they’ll pass in half circles or half complete triangles. All you need to do is figure out the end point of the passing play, and start moving towards that player in order to block the pass. Most players will try to make that pass anyway.

The great ones will notice what you’re doing and try to shift play, forcing you to shift your defending as well. That’s when you get those wonderfully fun and intense matches that feel like both players are equally matched.

Tip – Do Not Switch Players Constantly

If you switch players on every enemy pass, you’ll constantly be chasing the game. Like I touched on before, FIFA is not about harassing the ball carrier, it’s about cutting out dangerous passing.

In FIFA 18, it’s extremely easy for the ball carrier to get away from you if you rush them. So you’re much better off cutting passing options and using second man press (hold R1) to keep them occupied.

Mini tip – use right stick to switch to those dangerous runs, the harder you press it the harder it will go. The regular button player switch simply goes to the player whose nearest to the carrier, which is not always accurate/what you want.

In FIFA 18, holding the regular tackle button (circle/B) will do a more powerful lunge than just tapping it. This is fantastic because it can give you more strength and reach.

You don’t have to be up in the enemy’s face to collect the ball like in previous games, you can be a couple of steps away at times. However, remember that the further you’re away from the ball carrier, the more you need to hold down the tackle button.

Fiinnaaally, your players listen carefully to your player instructions in FIFA 18. If you tell someone to stay back, they will stay back! If you’re struggling defensively, it helps to have at least one of your CMs or CDMs set to stay back. It’s also paramount that they have a high defensive work rate.

A 77 – 79 rated CDM with high work rate defensively is going to serve you much better than an 82 CDM with medium or low if you need him to just be a CDM.

This is for 4atb formations.

That’s it for today comrades, I hope you find this helpful! Let me know if you have any questions or thoughts in the comments. Defending like this can take some time to get used to, but with enough practice you’ll have your enemies trembling before you.