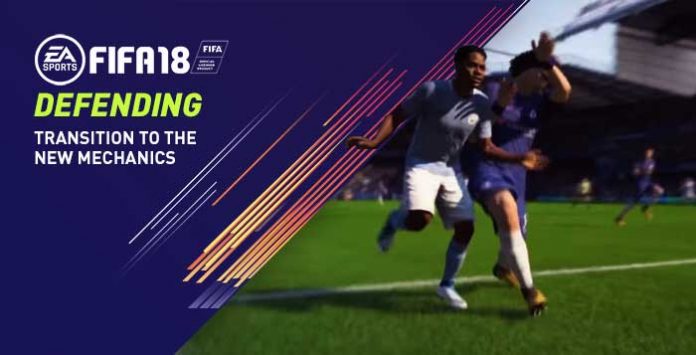 As you probably already know, we made a partnership with drpoplove. He is a former #1 FIFA and FIFA Street player in the world, and he will explain everything you need to know to improve your FIFA skills. Today, he will show you what’s different with the FIFA 18 Defending and how you can make a smooth transition to the new mechanics.

The transition to the new defending in FIFA 18 is brutal, it feels as significant as when we moved to Tactical Defending. But don’t worry, you’ll get used to it with practice, and hopefully my tips help you out.

Charging/Delaying Your Tackle Is Key

In FIFA 17 your tackles (B for XBOX, circle for PS4) were pretty static, there weren’t that many animations. If your tackle wasn’t perfect, it was useless. Many people let the AI do most of the defensive work.

In FIFA 18, you can charge/delay your tackle. You need to position yourself in the path of the enemy attacker whenever possible. If you can get them to run into you more or less, great, you’re defending like a true champion.

If you can’t, you gotta think in advance. If you must make a tackle, do it towards where the enemy player is heading. You can even use the tackle delay to your advantage, repositioning your body as you hold down the tackle button. FIFA 18 defending requires you to read the game now.

By raising the skill gap on tackling (regardless of whether you like the mechanic or not), the game seems to promote a more fluid build up. And it means that smart defending gets rewarded… In theory.

Tackling isn’t broken so far, but it it is timed differently than FIFA 17. Generally, you want earlier timing if possible.

Let The Animations Work For You

In FIFA 18, we seem to have way more tackle animations. For example, I’ve made tackles from behind with my player actually fighting for the ball and working his way around the ball carrier, all from a single button press.

Players in this game seem to love getting in tussles, and the animation engine seems to support it.

The animations take care of the rest. I’m anticipating a lot of weird animation fuckery as we get big chem boosts and TOTS cards, but for now, this is all we know.

Positioning is absolutely crucial in FIFA 18, and it was in 17 as well. But since you have more to think about in this game, positioning becomes way more important.

You never want to break your team’s defensive line, don’t wildly rush out with your defenders unless it’s a last ditch effort.

The same goes for your midfielders as well. For example, if you send a CM wide to defend, you’ll have a huge central hole (hehe) that will ruin your day. You’ll have to be more manual about marking enemy attackers in this game. 2nd man press is still good if you can spare a player, but I don’t think we can really talk about it too much until FUT gets going.

✅ Jockeying
You should be jockeying (L2/LT) often and letting go of it in order to reposition your players quicker and the move more like a sexy football genius spider.

✅ Sprinting
Don’t do it unless you’re playing catch up or have no better options to close gaps.

✅ Player Switching
Practice with the right stick and try to get comfy with it. The harder you push it the further the player switch will go.

The more you jockey (even when you don’t need to), the more the AI chills out. You can use this to fuck with any team you’re up against. I’m not sure if it’s a bug, by design, or a limitation of the demo, but frequent jockey spam against the AI makes them way more predictable, and many times it’ll make a crappy decision, like a long ball to Rashford when he’s not open.

That’s it for now comrades, we’ll see how FIFA 18 defending evolves as the game comes out. But if you can start implementing these core principles, you’ll be more golden than my last shower.