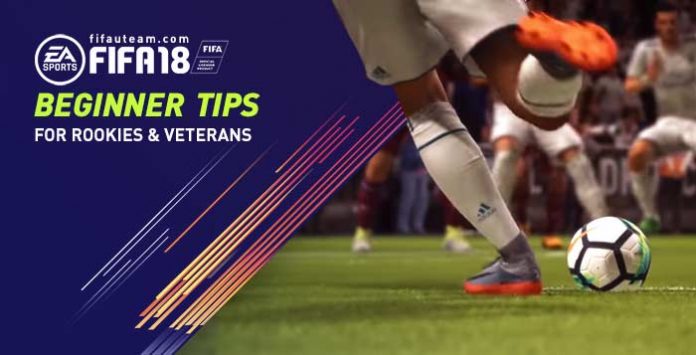 We work hard to bring you the best FIFA content available. We know that you want to improve your game and that’s why we are extremely happy to announce a partnership with drpoplove. He is a former #1 FIFA and FIFA Street player in the world, and he will explain everything you need to know to improve your skills. In this first lesson, he will share FIFA 18 beginner tips for rookies and veterans.

The first Lesson to become a better player: FIFA 18 beginner tips everyone should follow


Let’s get started with some “basics” that you need to know. If you’re a long time player, you’ll want to remind yourself with these tips as you enter the new game with a starter team that can’t perform as well as your old TOTS team.

You can always spot a FIFA rookie by how they attack. They either rush forward with just a couple of passes, or they take too long to move the ball around.

You should into the habit of constantly passing the ball, even if you’re not fully confident in your attacking abilities.

Moving the ball creates space on the pitch. It forces players to get into new positions, which means it forces your enemy to switch players, cut off new routes, mark various players, etc. The more actions you make the enemy defender take, the more likely they’ll be to make a mistake.

If you’re ever unsure of what to do in the first 2 thirds of the pitch, simply pass the ball to an open player. Even if you pass backwards or sideways, it’s much better than standing still. The longer you take with your ball movement, the easier it is for the enemy to set up and wreck your shit, counter you, and then dab your face into oblivion whilst spinning thirty-seven thousand fidget spinners.

Sprinting fucks you up. Not only will your touches be delayed because you push the ball forward, but it’s harder to be accurate with your passing, shooting, and movement. You’ll be a prime target for an easy tackle, you’ll lose the ball, and you’ll cry when the enemy scores an easy goal on you (and dabs).

So don’t sprint unless you have space to sprint into, or if you need to catch up while you’re defending.

Avoid sprinting in through the central areas of the pitch when they’re crowded, especially if your player doesn’t have great ball control. It’ll be super easy to take the ball off you, and losing the ball on the run like that will result in a swift counter-attack by the enemy.

Sprinting is great when you can take a few touches into space, and this happens most commonly on the wings by default. Sprinting is also great if you spot a solid attacking run from your player and do a through ball to them.

If you can wire your brain to think of sprinting as a luxury mechanic, you’ll become more mobile in attack and less predictable. And then you can be the one dabbing in the end 😛 Not every attack leads to a goal, so do your best to resist the urge to get the ball as far up the pitch as possible, in the shortest amount of time.

Unless you’re countering or exploiting a mistake, blindly charging forward is the best way to run out of players and lose possession of the ball. Remember to keep the ball moving, even if it’s laterally or backwards. In fact, sometimes you need to pass backwards to give time and room for other players to move into good attacking positions.

If you find that your attacks are ending quickly with just 3 – 5 passes, you’re probably charging forward too much, with no regard for human life. Although FIFA is much faster than real football, you still need to use your midfielders to move the ball around and control the match.

Speaking of control… that brings us to our next point!

Use Possession And Patience To Control The Game

You’re not guaranteed to win the game if you have more possession, but you sure as hell decrease the likelihood of getting scored on.

If you find that your enemy is better than you or playing a very fast paced style, slow the tempo down and focus on retaining the ball. If you usually make 10 passes in a typical attack, go ahead and make 20. The longer you hold onto the ball for a continuous period, the more antsy the enemy becomes. And if you’ve got ants in your pants, you’re more likely to make a mistake.

Always remember: the enemy cannot score on you if they don’t have the ball. You should consider possession as your first line of defence even.

However, this doesn’t mean you can just pass the ball around your back 4 and expect great results. Far from it. You have to keep the ball moving around the final 2 thirds of the pitch and probe them as much as you can.

If you can get them to lose focus or break down mentally, you’ll have an easy win.

Let’s go to the last one of the FIFA 18 Beginner Tips. Mistiming a tackle is one of the easiest ways to get scored on. You should tackle the ball carrier only if you’re 100% certain that you’ll get the ball, or if you need to extend your reach.

Otherwise, simply positioning your player into the path of the attacker is more than enough.

It’s similar to defending in real life in the sense that positioning is usually better than going for a tackle. Guys like Maldini and Ferdinand would rarely make tackles because their positioning was so good.

Make no mistake though, I’m not saying you should avoid tackling altogether. There will be plenty of times you’ll absolutely need to stop a player in or around your box. Just remember, tackle when you’re sure or when there’s no other option. Alright, let’s call it a day here with the “basic” tips. I shared with you the most important FIFA 18 beginner tips and I hope they’ve been helpful if you’re new, or have served as a good reminder if you’re a veteran!