The forwards are the players on which fall the most responsibility of scoring goals.
Top 10
Key Attributes
Rating
Shooting
Physical
Pace
Top 10
Key Attributes
Most goals are scored with the foot, so good shooting is a must-have attribute for a forward. The physical attribute is also important. It’s made of three stats: jump, to score with the head; strength, to dispute the ball with the opponents; and stamina, to sprint in goal’s direction. Depending on the style of play and formation, having good shooting and heading may not be enough for a striker. Especially in games that privilege counter-attack, pace is a very important attribute.
Rating
Shooting
Physical
Pace 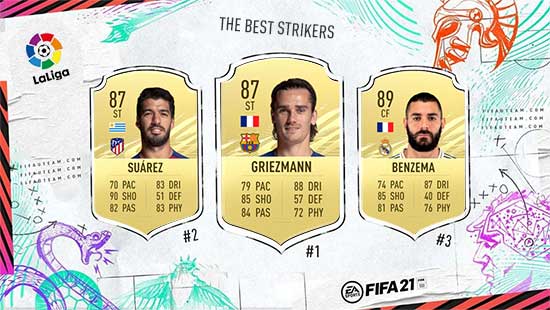 Suárez and Griezmann are the two best strikers playing in Spain. Pace and strength are the biggest differences between them. The French forward is faster but also weaker. We agree that the new Atletico signing may not be fast enough to fit in many squads but his work rate looks better than the ones from Griezmann, Benzema and Félix, for example.

For the third-position, it’s up to you to decide which is more important: a fast striker or a clinical finisher. On the first case, we suggest Iñaki Williams. Only 5 players in the world are faster than him. If you prefer the second option, then Benzema would be a wise decision.