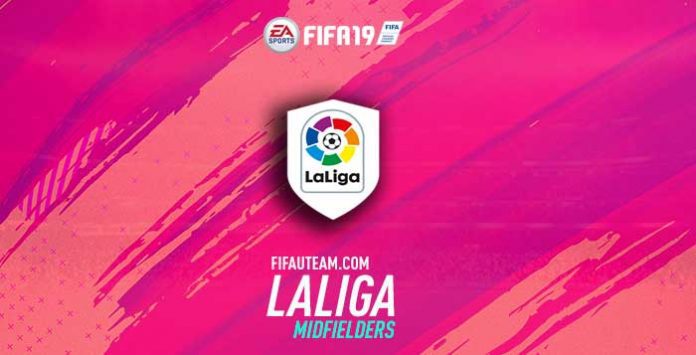 Who are the best FIFA 19 LaLiga midfielders? Let’s find out good defensive, centre and attacking midfielders, as well as right and left wingers, to your team!

Many of the FIFA 19 Ultimate Team formations require some midfielders that have a natural aptitude to defend. Central defensive midfielders distinguish themselves for being especially aimed to help the more retreated line of their teams. According to their attributes and their work rates, they can also be useful for starting attacks. They are players that occupy a very strategic position in the field.

Casemiro and Busquets are by far the most popular defensive midfielder.

There are a variety of attributes in a central defensive midfielder that you have to give attention: defending, so that the first defender of team works; strength, so that you win all brawls in a prone area of the field; heading, to win possession in aerial moves like goal kicks; pace, so that you cover the most terrain on the field as possible; stamina, so they can equally participate in offensive and defensive moves (especially useful for players with high/high work rates); passing and possession so that he can properly start attacks. In our opinion the two first are the most important.

Normally using a central defensive midfielder is associated with having a deficit of elements in your defence. So, it makes sense that when you search for a player to occupy this position you’d want players that can defend.

Casemiro is the one who defends better.

The area of the field occupied by the central defensive midfielders is the one where most ball disputes happen. Strong players will have a higher probability of winning the ball.

Oce again, Casemiro is the strongest one.

In our opinion, Casemiro is the right choice for this position. He is the CDM who gives more security to the back line but he is also a good offensive player. He could be faster but compared with the other CDMs, he is OK.

Thomas Teye Partey was a pleasant surprise and definitely great value for money. He doesn’t have the stats of Arturo Vidal, especially shooting, but if you want someone to play anywhere in the field, you should look to him, since he has a high/high work rate and superb stamina. Because of his low speed, Busquets was relegated to the fourth position. A lot of games are decided in the midfield and not close to the goals. The players that play in these zones are the ones that should create the game and define its rhythm.

It’s in midfield that there’s more quality in the LaLiga. Some of the world’s best footballers play there. It’s the case of Luka Modrić and Toni Kroos.

Centre midfielders are responsible for discovering lines that break the opponents defence. Their passing quality has to be really good so they can assist forwards.

Even though Kroos and Parejo have a great passing stat, Modrić is the one who does it better in the whole LaLiga.

Once again, Luka Modrić is the centre midfielder with best dribbling stat in the LaLiga.

The best player to use in this position is obviously Luka Modric, FIFA Player of the Year winner. He isn’t cheap but he has a lot to give to your team. Kroos is the best alternative to him. He isn’t so fast but has a better shooting, including a 5-stars weak foot.

If your budget isn’t good enough to buy them, you can try to replace them by Rakitic. However, we strongly suggest you to try Kondogbia. He is able to help your defense and recover the ball, which means that he can be very useful when playing side by side with someone more creative. An attacking centre midfielder is responsible for creating chances to score. He should have a good dribbling, a decent passing, a high long shot stat and a great vision.

Isco is the only top-quality CAM playing on this league.

How we explained, the central attacking midfielders need to have good passing stats, so they can assist forwards.

No one has better passing stats than Banega.

If a CAM is a good dribbler, he can make all the difference when the team is attacking.

Once again, Isco is clearly the best one on dribbling.

Isco is easily the best CAM playing on this league. No one can be compared to him. However, he’s not cheap and you may need an alternative. The problem is to decide between Rafinha and Éver Banega. The first one is faster, has better shooting and more interesting work rates. The other is stronger and finds a chance more times. The wingers are responsible for giving game width in the attack. They’re normally very explosive players.

Gareth Bale is one of the most rated players in this league.

There are three fundamental attributes for a winger: pace, dribbling and passing.

Pace is probably the biggest weapon of these players. They use it to evade opponents and getting to the other side, many times via sprints on the side lines.

Just being fast doesn’t cut it to reach the opponents box, having good dribbling to surpass the opponents’ players that appear on the way.

There are a lot of players gifted in dribbling, being Ousmane Dembélé the best.

When reaching the opponents box the winger has to decide what to do. Normally, they choose to cross to the forwards. That is why it’s important for them to have good passing.

Surprisingly (or not!), Pedro León is the right midfielder with the best passing stat on this league.

You know Gareth Bale. He’s a beast. With him on your team you will have a lot of quality time playing FIFA. However, he’s very expensive and you probably will need to find a few alternatives to him.

Dembélé is a great choice if you need someone focused on the attack, but Malcolm is also a good player. There is also Gelson, who is extremely fast and has five-stars skills. He is the right man to run on the flank. We know that Aspas has a lot of fans but we believe his stats are more suitable for a striker and we are analyzing wingers. If you usually love to shoot with them, then maybe you should use him. The left wingers have exactly the same role as their team mates from the other side.

Coutinho, Asensio and Koke are the three most popular players in this position.

LaLiga left wingers are extremely fast. There are four players playing in this position with pace equal or higher than 90.

Coutinho is the LaLiga winger with the best dribbling stats.

Koke and Coutinho are clearly the best fitted passers between the remaining left wingers.

As expected, Coutinho is the best left winger on this league. However, don’t think he can’t be replaced. Promes was an amazing addition this year. He has 5/4 stars, just like Coutinho, is much faster and everyone want to try him.

There are no much difference between Lemar and Asensio. We believe that the first one has stats more suitable for his position, and for that reason we put him on the third place of our list. If money is a problem, you can play with Gonçalo Guedes. He’s not as good as the first four but, for low budget squads, he will make the difference. Koke and Vinicius Júnior are very popular players but were relegated for lower positions because of their low pace and passing stats, the two most important attributes for this position.