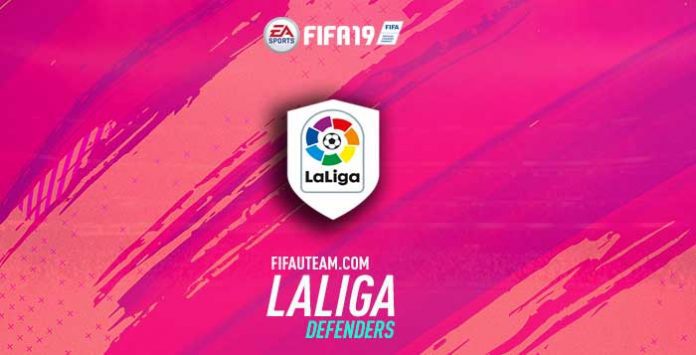 Who are the best FIFA 19 LaLiga defenders? Let’s find out good right-backs, left-backs and centre-backs to your team!

A goalkeeper task is made easier if in front of him are quality central backs. Their function is to stop the opponent from getting dangerously close to your team’s goal.

Sérgio Ramos and Godín are the two most rated centre-backs in FIFA 19.

On a centre back, two attributes assume particular importance on their performance: defending and physical, which represents strength, stamina, aggression and jumping.

A player with good at defending will have an easier chance of dispossessing the opponent and avoid him reaching your box.

It’s the case of Ramos and Godín. It’s really hard to get past them. The most experienced players, like Piqué, are normally those who have a higher rating with this attribute..

The physical attribute shows the old heading capability but also how likely the players are to win game with their body. This is a crucial attribute when looking for the best centre back.

In this chapter, the players from the LaLiga are very balanced.

Defending and heading may be useless against fast opponents. It’s necessary to fight fire with fire. No one likes feeling impotent when seeing you get overrun by extremely fast players. Even though, in a way, centre backs aren’t that fast, every team needs one of these players with a high pace attribute.

This is where Raphaël Varane is much much better than any other centre-back from LaLiga. In fact, he is the fastet gold CB of FIFA 19.

Sergio Ramos is our first choice for this position. He has the highest defensive and physicality stats (the two most important attributes) and he also features in the top 3 for the other four main attributes. Just like Umtiti, he is better than Varane in everything, except pace. If you think that Umtiti is fast enough to your needs, then keep with him because as a defender he is better than the young Madrid centre-back.

In terms of cheaper defenders, and in the case your budget doens’t let you to buy Godín, our suggestion goes for José María Giménez. For those of you who are asking why Piqué is only the seventh on our list, we invite you to try him and find out. He’s slow and gets tired too often, which makes him an option only for teams playing with 3 centre-backs. Full backs have the role of troubling the job of wingers. In addition, good full backs also support their team mates on offensive manoeuvres.

Carvajal and Sergi Roberto are clearly the most popular right backs playing on this league.

There are very important attributes for any right back: defending and pace.

Since they’re defenders they should have good defending capacities. This reduces a team’s risk of conceding.

The two most rated players are also the ones with the best defending stats.

A flanked game tends to be faster than a game based in the middle of the field. The players that fill these spaces are obligated to be fast, both penetrating defensive and attacking moves of the team. Pace is one of the most important requirements for a good full back. Even in FIFA 19.

Nelson Semedo and Aleix Vidal are far superior in this aspect when compared to every LaLiga right back. Besides them, only Lekue may be considered reasonably fast.

In our opinion, Carvajal is the best option to the right side of your back line. He is good on both attacking and defence. However, if all you need is pace, then Nélson Semedo is who you are looking for. He and Vidal are both very attacking players, while Sergi Roberto is more balanced. Left backs have exactly the same role of their team mates on the other flank. In other words, they try to make a winger’s job hard and participate in the team’s offensive manoeuvres.

Marcelo is the most rated full back of FIFA 19.

Besides being the highest rated LB, Marcelo is also the one who defends better in this league.

Jordi Alba makes his speed his biggest threat, and only Theo Hernández and Mojica can be compared with him in this stat.

Marcelo is undoubtedly the best option to this position. This year, the Brazilian left back has one more reason to be picked: he is a 5-stars skiller. Jordi Alba, the fastest LB in the game, is the better alternative to him.

Usually, we don’t pick slow full backs to the top positions of our ranking, but in this case there is lack of quality players. In our opinion, Filipe Luís is better than Lucas and Theo Hernández but we wouldn’t like to reccommend any of them. The other players are even worse. Most of them don’t even support their defense as they were supposed to do.