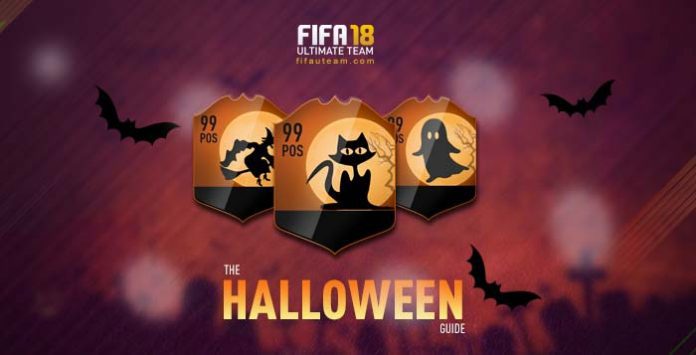 FIFA 18 Halloween is an FUT promotion which takes place once a year to celebrate the Halloween day. It usually includes multiple packs offers on the FUT store, themed kits, new squad building challenges and a few other surprises, like the release of the Ultimate Team Scream cards. In this guide, you will have the chance to know everything about the FIFA 18 Halloween event, including the expected release date, the official rules and the list of all Ultimate Scream cards.

What is the FIFA 18 Halloween Promotion?

During the FIFA 18 Halloween promotion, Electronic Arts releases several FUT pack offers, themed kits, Ultimate Team Scream cards and squad building challenges. This promotion is not one of the most popular but it is still important because it is the first one.

Details on FIFA 18 Halloween offers will be updated here.

When the FIFA 18 Halloween promotion will be released?

In the following table you can see the Halloween event release dates of previous years:

For FIFA 18 Ultimate Team, the Halloween event will take place on the following dates: To promote the event, Electronic Arts introduced in FIFA 17 a brand new themed card. The Ultimate Team Scream cards are assigned to a selection of 23 players, chosen based on exceptional real world performances, records and FUT attributes, and released all at once in a single FUT squad.

Based on what happened last year, these are the official rules we expect to see this year:

RULE 1
AVAILABILITY
FIFA 18 Scream cards become available in packs for a full week. During this period, they replace the corresponding regular not coloured cards. In other words, it is not possible to find a regular card of a Scream player during the Halloween event.

1.1. If you own the regular card of a scream player, your card will keep unchanged. If you want the new version, you will need to buy the corresponding version in the market or pull it from a pack in that week.
1.2. Your odds of pulling one of these Scream cards from a pack are exactly the same of pulling the day 1 card of that player in another time.

RULE 2
RATINGS AND STATS
From 20 October to 27 October, 23 Ultimate Scream players will be released in packs with upgraded ratings as unique items. However, these upgrades will only be available during the Halloween period (29 October to 1 November). These temporary boosts come to an end on November 1st and their ratings revert back to match their initial release upgrade. After the Halloween period, the only difference between the Halloween cards and their respective original NIF cards is the colour and a small boost. However, the boost will be back at spooky times throughout the season.

RULE 3
WINTER UPGRADES
If a player is upgraded, his Scream card will also be upgraded.

3.1. Usually, if an upgraded player’s new OVR rating equals or surpasses his existing first in-form’s rating, his special cards will get an upgrade. However, an exception is made to Ultimate Team Scream items. These cards are not take in consideration as special cards.

RULE 4
SQUAD BUILDING CHALLENGES
When Ultimate Scream items are boosted, they can be used in any SBC at their higher rating. Who will get a FIFA 18 Ultimate Team Scream card? Scream players are not randomly selected. They are chosen based on their exceptional real world performances, records and FUT attributes. Here are our predictions for these new FIFA 18 Halloween cards: What you can win with the FIFA 18 Halloween event?

The FIFA 18 Halloween offers include:


How the Market is Affected by the FIFA 18 Halloween

When the season begins, thousands of players start waiting for EA to release the best packs on the store in order to build their squads. Because of that, the first event of the year is extremely waited and is associated with the first price drop in the game. However, don’t expect a huge drop. The biggest drop only takes place a few weeks later.

Besides the first 50k packs, Halloween on FIFA 18 features some theme cards, special squad building challenges and other offers.

Ultimate Scream starts in 1hr, at 6pm UK. Get them… before they get you. 😱 pic.twitter.com/ooSIWkqck6

Q: What can we expect from FIFA 18 Halloween?
A: Happy Hours, squad building challenges, themed cards and a few other surprises.

Q: Which Happy Hours can we expect on these days?
A: Not good ones, because happy hours are still in an early stage in this time of the season.

Q: Will EA Sports release free packs to everyone during FIFA 18 Halloween?
A: No, it is highly unlikely.

Q: What makes Ultimate Scream items special?
A: Each Ultimate Scream player comes on a unique item shell and an upgraded rating upon release. But it’s during various periods during the season where the additional temporary boost takes them from scary to utterly terrifying.

Q: How does the Temporary Boost work?
A: Each Ultimate Scream player comes on a unique item shell and an upgraded rating upon release. But it’s during various periods during the season where the additional temporary boost takes them from scary to utterly terrifying.

Q: Are Ultimate Scream Players tradeable?
A: A: Yes. You can trade the 23 Ultimate Scream players that you find in packs from the auction house from Oct 20 onwards. When they receive their temporary boosts, you can still trade them but beware, they will return back to their original initial upgraded rating once the boost period ends.

Q: What happens to Ultimate Scream items after Halloween?
A: The first boost period is Halloween, from 10am PDT on Oct 29th until 11am PDT on Nov 1st. Future boost periods will be announced closer to their start time.