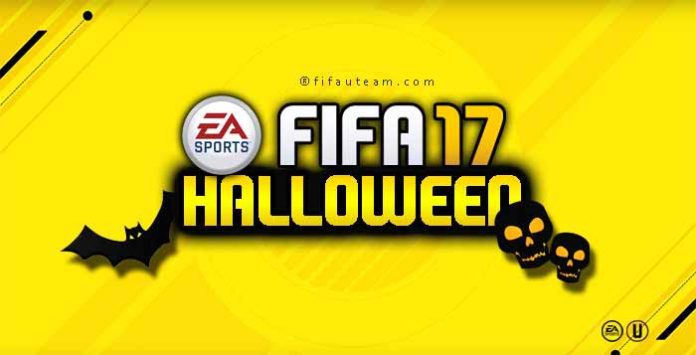 FIFA 17 Halloween is a FUT promotion which takes place once a year to celebrate the Halloween day. It offers multiple pack offers on the FUT store, themed cards and kits, new squad building challenges and a few other surprises. In this guide you can know everything about the FIFA 17 Halloween, including how it affects the market, how it was in previous years and an updated promotional offers list.

What is the Halloween Promotion? During the FIFA 17 Halloween, Electronic Arts releases several FUT pack offers, themed cards, kits and squad building challenges. This promotion is not one of the most popular but it is still important because it is the first one.

Details on FIFA 17 Halloween offers will be updated below.

When Halloween promotion will be released?

For FIFA 17 Ultimate Team, the Halloween event date is:

In the following table you can see the Halloween release dates of previous years:

What you can win with the FIFA 17 Halloween?

THEMED KIT CONFIRMED
The Halloween kit of the following image can be yours. You will have to complete the squad building challenge ‘Spider’s Web’ to win it as a reward. THEMED PLAYERS CARDS CONFIRMED
The Scream Team come alive for Halloween in Ultimate Scream, a brand new event in FIFA Ultimate Team. From Oct 21st to Oct 28th, 23 Ultimate Scream players will be available in packs with upgraded ratings as unique items. During the Halloween period (Oct 28 6pm 🇬🇧 – Nov 1 6pm 🇬🇧) these players will “come alive” and get ratings boosts, making them utterly terrifying. Be warned, these boosts are temporary. On Nov 1st at 10am PDT the temporary boost ends and their ratings revert back to match their initially released upgrade. You can learn more about these cards in the FAQ chapter. Here is the list of players selected for a FIFA 17 Halloween card:

How was the Halloween promotion in FIFA 16?

These were the offers available last year: How the Market is Affected by FIFA 17 Halloween

When the season begins, thousands of players start waiting for EA to release the best packs on the store in order to build their squads. Because of that, the first event of the year is extremely anticipated and is associated with the first big price drop in the game. Normally this happens at FUT United but this year Ultimate Scream took place. Halloween, which on FIFA 16 went pretty much unnoticed, was elevated to the event category this year and EA even innovated with some big offers, catching players by surprise. Besides the first 50k packs, Halloween on FIFA 17 featured with some theme cards, special squad building challenges and other offers.

This event was announced on the same day it started, that explains why the market was pretty much intact before this date. The price drops occurred all on the first day and no significant increases happened during the remaining days of the promotion. Between the first and the last day of the Halloween event, prices dropped from 20 to 25%, and recovered something around 5% after the end. Q: What can we expect from FIFA 17 Halloween?
A: Happy Hours, squad building challenges, themed cards, and a few other surprises.

Q: Which Happy Hours can we expect on these days?
A: Not good ones, because happy hours are still in an early stage in this time of the season.

Q: Can we expect 100k Jumbo Rare Players Packs ?
A: No. We don’t estimate 100k packs to celebrate the Halloween.

Q: Will EA Sports release free packs to everyone during FIFA 17 Halloween?
A: No, it is highly unlikely. However, .

Q: What makes Ultimate Scream items special?
A: Each Ultimate Scream player comes on a unique item design and an upgraded rating upon release. During the Halloween period, the additional temporary boost takes Scream Team players from scary to utterly terrifying. Continue to play with them and/or use them to complete themed Ultimate Scream Squad Building Challenges, which will run from Oct 21 through Nov 7 for themed rewards.

Q: How does the Temporary Boost work?
A: All 23 Ultimate Scream players will automatically receive terrifying temporary stats boosts from Oct 28th 10am PDT – Nov 1st 10am PDT. For example, Hector Bellerin will be released as an 80 OVR rated Ultimate Scream item, available in packs from Oct 21 to Oct 28. This item will be temporarily boosted to a 90 OVR rating during the Halloween period. When the period ends, the item goes back down to its original initially upgraded 80 OVR Ultimate Scream rating.

Q: Are Ultimate Scream Players tradeable?
A: Yes. You can list the 23 Ultimate Scream players on the transfer market from Oct 21 onwards. When they receive their temporary boosts over the Halloween period, you can still trade them but beware, they will return back to their original initial upgraded rating on Nov 1st 10am PDT.

Q: Is it true that last year Halloween Promotions were also available for FIFA mobile?
A: Yes, it is. However, the promotions were not the same ones of the consoles. For Android and iOS devices, EA released Halloween cards called ‘Most Feared’ to players with at least a 90 in-game strength rating.