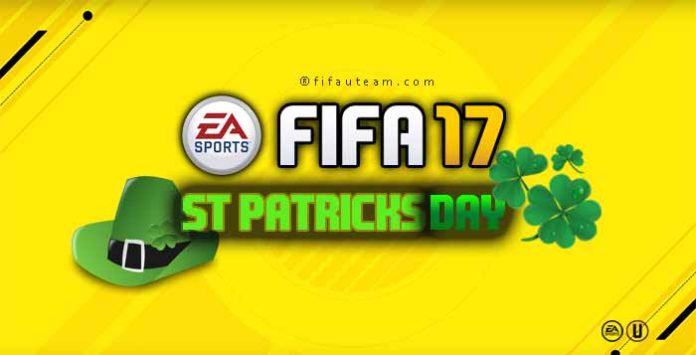 FIFA 17 St Patricks Day is a yearly festive promotion that is largely known by its tournament and the green cards assigned to a selection of Irish players. In this guide you can know everything about the FIFA 17 St Patricks Day, including how it affects the market, how it was in previous years and an updated promotional offers list.

What is the St Patricks Day event?

St Patricks Day is a cultural and religious celebration held on 17 March, the traditional death date of Saint Patrick, the foremost patron saint of Ireland. Electronic Arts joined in FIFA 13 to the Irish celebration that takes place every year, releasing the most awaited tournament of the year. This special FUT tournament is usually the one with the greatest win rewards but we don’t expect to see it coming back this year.

Since FIFA 15, EA is also releasing special Irish themed FUT promotional packs and assigning green cards to a selection of twenty three Irish players. The only difference between these cards and the original ones is the colour. During five days, the player’s cards pulled from packs are released on green instead of their normal colours. The discard prices of these cards are also different. The FIFA St Patricks Day cards have the same quick sell prices of the other In Form cards. A variety of Irish themed pack offers will also be released during this promotion.

Details on FIFA 17 St Patricks Day offers will be updated below.

When FIFA 17 St Patricks Day promotion will be released? The St Patricks Day promotion has been going since FIFA 13, making it one of the oldest FUT events.

In the following table you can see the St Patricks Day events release dates of previous years:

How was this promotion in FIFA 16?

These were the offers available during the St Patricks last year. The celebration of the St Patricks Day for FIFA 16 was based in three main offers.

What you can win with the FIFA 17 St Patricks Day Promotion? This exclusive themed kit will be available to everyone who completes the Green Team SBC.
Starting at March 16, you just need to submit the team and go to your console to redeem this kit. To celebrate the St Patricks Day, Electronic Arts will release a complete squad featuring 23 Irish players. The players of this green team will receive themed cards with no boost.

These cards become available in packs from March 16 to March 20. During this period, which starts at 6pm (UK time), the FIFA 17 green cards replace the corresponding regular not coloured cards. In other words, if a player gets his St Patricks card in packs, it is impossible to find his regular card there. Your odds of pulling a green card from a pack are exactly the same of pulling the day 1 card of that player in another time.

If you own the regular card of a St Patricks player, your card will keep unchanged. If you want the green version, you will need to buy the corresponding version in the market or pull it from a pack in that week.

The only difference between the St Patricks cards and their respective original NIF cards is the colour. There is no boost in the stats or in the attributes. During the period of the promotion, a selection of player’s cards pulled from packs are released on green instead of their normal colours gold, silver and bronze. St Patricks are not In Form cards because there is no boost.

You can learn more about these cards clicking here.

Here is the FIFA 17 Green Team: As it is happening in every single FIFA 17 event, new squad building challenges will be released. To celebrate the St Patricks Day, play this special SBC group with the chance to earn unique rewards. Hurry though, it’s only available for a limited time! 
How the Market is Affected by the St Patricks Day Event

What happens to the cards’ prices during the St Patricks Day Promotion?

The St Patricks Day promotion has a huge impact on the FUT 17 market, but almost only in the Irish players cards.

Many Irish players increase in price a few days before St Patricks Day event start. Specific players will more than double in price, so investing early can make you a lot of FIFA 17 coins. Remember to sell before the promotion actually starts. The best time to buy Irish players is during the TOTY but beware as players are starting to invest earlier and earlier. Even some of the cheaper non-rares increase considerably in price, especially if they fit the Pot of Gold Group SBC requirements and are given a green team card. You should sell your investments in the week before the promotion starts if you want to maximise your profit.

What you need to know about FIFA 17 St Patricks Day

Q: Can you explain me how the green team works?
A: EA releases every year a selection of 23 green players cards to celebrate the St. Patrick’s Day. These cards have no boost. Basically, the only difference to their respective NIF cards is the colour. During the event, the player’s cards pulled from packs will be released on green instead of their normal colours. They have the same quick sell prices of the other In Form cards.

Q: Will EA Sports release free packs to everyone during FIFA 17 St Patricks Day?
A: No, not even Daily Gifts. Don’t expect great offers as you can find in FUTmas, FUT United or FUT Birthday.