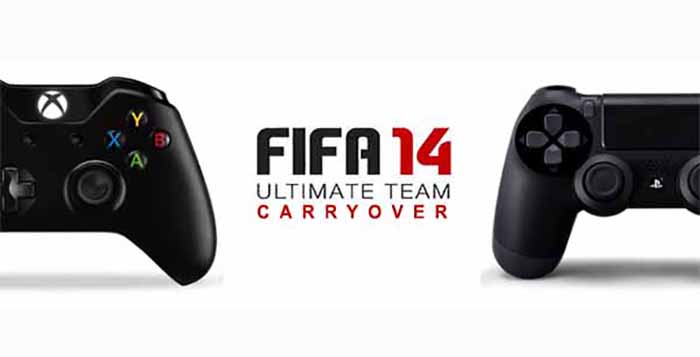 FUT 14 will go cross-generation. It means that you can transfer FUT 14 Progress from current-gen to next-gen consoles.

Transfer FUT 14 From Current to Next-Gen

EA Sports made everything it is possible to be made to turn the migration between current and next-gen consoles in a pleasant journey. Players will not need to choose between the two generations, since they will be able to transfer FUT 14 progress from current to next-gen without any troubles. To the lucky ones with enough money to buy both FIFA’s, it is the perfect scenario. And to EA Sports it is a gold mine.

But how the next-gen carryover will work ? Here are the things that can be shared between Xbox 360® and Xbox One®, and between PlayStation®3 and PlayStation®4.

All your cards (including players); This will be possible because FIFA 14 Ultimate Team will share a common auction market. One to PS3/PS4 and another one to XBox360/XBox One, like it currently happens. Playing FUT 14 in a current gen console or in a next-gen console will be the same thing. The only thing that will not be possible to do is to play matches between the two generations. All changes made in FIFA 14 Ultimate Team will be reflected in both consoles so gamers will be able to compete with their squads on either console throughout the season.

EA Sports didn’t said nothing about it but we suspect that they will give a bonus to players that transfer FUT 14 from current to next-gen consoles. As it will happen with the players of FUT 13 that will play FUT 14, the FUT 14 current-gen players that migrate to the next-gen will get a welcome back offer (packs).

Gamers will also have the chance to transfer their FIFA Points between Xbox 360 and Xbox One, and between PlayStation 3 and PlayStation 4. But pay attention: it can be made only once.

All these news seems be great to players that will play FUT 14 on PS3 and on PS4 or on XBox 360 and on XBox One. But to transfer FUT 14 from current to next-gen consoles you will need to be on the same platform. It will not work well with PS3/XBox One or XBox360/PS4. Unfortunately, you can not transfer your Career Mode players or club from Xbox 360/PS3 to Xbox One/PS4 because of the way in which the different save files are stored from generation to generation. You will, however, receive rewards based on your Career progress on Xbox 360/PS3 that can be applied at the beginning of a new Career on Xbox One/PS4.

How does it work? As you go through the boot flow of FIFA 14 on next-gen, the game will recognize if you played FIFA 14 on Xbox 360/PS3, including how many games of Career Mode you have played. It will inform you of any carry over or perks that apply to your gaming progress. Regarding Career Mode – any time you start a new Career you will be presented with a screen showing you the rewards you have been awarded and the option to disable some of them for that particular CM save file. You need to have played at least 15 games of Career Mode on Xbox 360/PS3 to qualify for these perks, and the more you played, the better the rewards. Below is a detailed breakdown of what you would get based on the amount of games played.