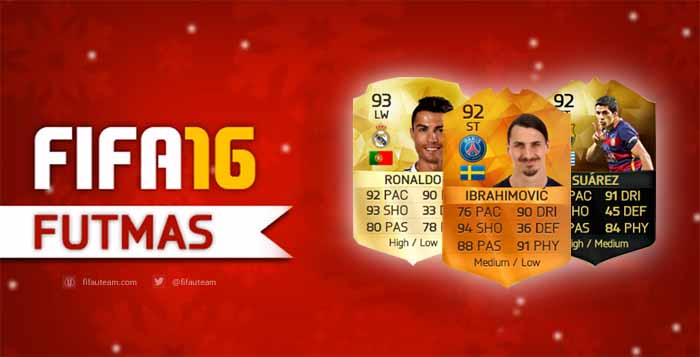 FIFA 16 Ultimate Team is celebrating FUTmas with new offers every day. From December 18, 2015 to January 2, 2016, check out all the exciting offers in-game available for a limited time only. Whether it’s a tournament or pack offer, there is something for everyone!

Read our short guide to know the complete program and how FUTMas works.

Q: What is FUTMas ?
A: FUTMas is an event created by EA Sports to celebrate the Holiday season. During the FUTMas there is a new Happy Hour, a free pack or a new tournament every day.

Q: When is FUTMas ?
A: Every year, during the Holiday season. In FIFA 16, it takes place between December 18th and January 4th.

Q: Are there Daily Gifts during the FUTMas ?
A: Yes. Daily Gifts are assigned every day during FUTMas.

Q: What is the schedule of FUTMas for FIFA 16 ?
A: You can check it in the top of this page.

Q: Which Happy Hours takes place during the FUTMas for FIFA 16 ?
A: Check here please.

Q: Which Tournaments I can play during the FUTMas for FIFA 16 ?
A: Check here please.

Q: FUTMas and ’16 Days of FIFA’ are the same thing ?
A: No. The only thing they have in common is that they are released during the Holiday season. During the ‘16 Days of FIFA‘, EA Sports offers special gifts to their social channels followers.

Q: When will 100k packs be released ?
A: In the previous seasons, 100k packs were released on December 26th and on the first two days of the year. We think they will be released again on these three days but also in other days, like December 18.

Q: It is possible to know which packs will be released on which days ?
A: No. We can only speculate on the basis of what happened in previous years:

Q: How Lightning Rounds work ?
A: On Lightning Rounds, best packs have a global limited amount of packs to be sold. The first to come is the first to be served. On other hand, without a limit of packs for each user, you are free to buy how many promo packs you want as long as they are not sold out.

Q: How different are the tournaments released during the FUTMas ?
A: Usually, they have better prizes.

Q: Will EA offer free packs during FUTMas ?
A: Yes, they will. However, these cards will be untradeable.

Q: How FUTMas affects the market ?
A: The FUTMas has a significant impact on the FUT 16 market, especially on days when the best packs are released (December 26th, January 1st and January 2nd). On these days lots of packs are sold and many new gamers start playing the game. There are more cards on the market and the prices are lower. Usually the prices drop more than 20%, which means that you can buy cards and sell them shortly after by very considerable profit margins.

Q: How to profit with FUTMas ?
A: It is very easy to make coins during the FUTMas. You just need to sell and buy cards at the right time. Don’t buy packs. Take the chance to build a better squad or to buy low and sell higher.

Q: When should I sell and buy cards ?
A: The first market crash happens during the FUT United. Nothing remains the same after this day. During Black Friday and Cyber Monday, the prices are still much lower than before FUT United but, until the FUTMas release, the market recovers and the prices go slightly up. That increase won’t last longer: once the run to the packs begins, the market gets full of NIF cards and their value drops substantially. That happens during FUTMas, not so much because of the season promotions, but more as an anticipation of what will happen on TOTY week (January 11 to 17).
As players become more aware of cyclical events in FUT, it becomes easier to predict what’s going to happen. In this context, the crash anticipation occurs each time sooner. For example: prices dropped until Black Friday morning and then started to slightly increase, as a result of the high speculation felt on previous days. It will be just like this with FUTMas. The best thing to do is to sell everything as soon as possible, preferably until the 18th, and (re)buy them again on the TOTY week, when the cards prices reach their lower peak. For who is more experienced, we recommend buying and selling several times during this season. We already announced when 100k packs will be out, so you should take advantage of this information to anticipate yourself to the market behaviour.

Q: In which cards should I invest ?
A: Be aware that, because of its lower offer, the downgrade of IF cards and best players (lower cardweight) is lower and more unpredictable. For this reason, we recommend you bet on buying NIF players or consumables up to 5k coins. Its downgrade is much higher in percentage and can achieve, in some cases, prices 50% lower.