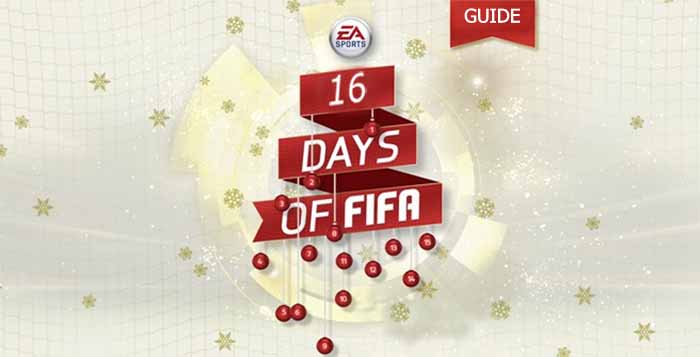 16 Days of FIFA. Is this familiar to you ? If this is something new to you, don’t miss this short guide. We will explain what is the biggest social giveaway of the year..

Q: What is ’16 Days of FIFA’ ?
A: It is an event that EA organizes to celebrate the holiday season.

Q: When will take place ’16 Days of FIFA’ ?
A: Probably 16 days before Christmas. In other words, it will starts on December 10 and runs until December 25.

Q: Which are the highlights of ’16 Days of FIFA’ ?
A: This event is announced as the biggest social giveaway of the year. In other words, EA Sports will be giving away new prizes everyday to their social networks followers.

Q: What exactly are the prizes ?
A: You can check the program in the top of this page. During the event, EA Sports FIFA will be offering FIFA 16 copies, signed jerseys and more merchandising.

Q: How can I be eligible for these prizes ?
A: You need to follow at least one of the three EA Sports FIFA social networks (Facebook, Twitter and Instagram) and reply to their posts.

Q: Are these prizes available for all platforms ?
A: Yes.

Q: ’16 Days of FIFA’ is something about the first days after its release. Right ?
A: Wrong. You are talking about another thing, ‘The first 16 Days of FIFA 16’ that you can find here. There is a great infographic about it here.