Many of the FUT formations require some midfielders that have a natural aptitude to defend. Central defensive midfielders distinguish themselves for being especially aimed to help the back line. According to their attributes and their work rates, they can also be useful to start attacks. They occupy a very strategic position in the field.
Top 10
Key Attributes
Rating
Defending
Physical
Top 10
Key Attributes
You need to look at several attributes when choosing a central defensive midfielder: defending, to be able to support the back line; strength, to win possession more times; heading, to win the ball in aerial moves like goal kicks; pace, to cover as many spaces as possible; stamina, so he can equally participate in offensive and defensive plays (especially useful for players with high/high work rates); passing and possession, so that he can properly start attacks. In our opinion, the two first are the most important ones.

Usually, defensive midfielders are chosen to help the defence. So, it makes sense that they have high defensive stats. The area of the field occupied by CDMs is the one where most ball disputes happen. Strong players will have highest probabilities of winning the ball.
Rating
Defending
Physical 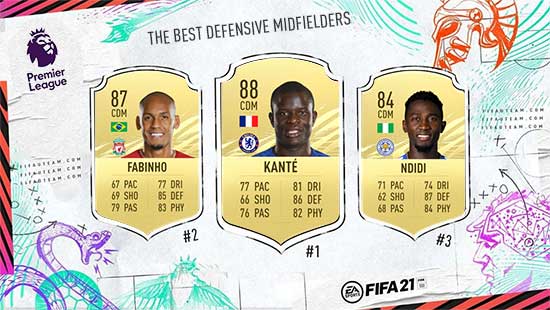 Kanté is clearly the best defensive midfielder of this league. Strong, fast and with good defensive and dribbling skills, you can count with him to defend but also attack.

Ndidi is one of the good surprises this year. No one will protect the backline as he does. However, if you want someone also able to start an attack, Fabinho will be a better choice, especially because of his passing stat.

Far from the quality of these three, there is Henderson, Rodri and Gbamin, the fastest one. For lower budgets, we recommend using Tomáš Souček or even Berge, who is better and much cheaper than Bakayoko. A final word about Fred. He would obviously reach a higher position if this top wasn’t about the best defensive midfielders. He is, in fact, a good player but not for this position.

A lot of games are decided in the midfield and not close to the goals. The players that play in these zones are the ones that should create chances and set the pace of the game.
Top 10
Key Attributes
Rating
Passing
Dribbling
Top 10
Key Attributes
Centre midfielders are responsible for discovering lines that break the opponent’s defence. Their passing quality has to be really good so they can assist forwards. 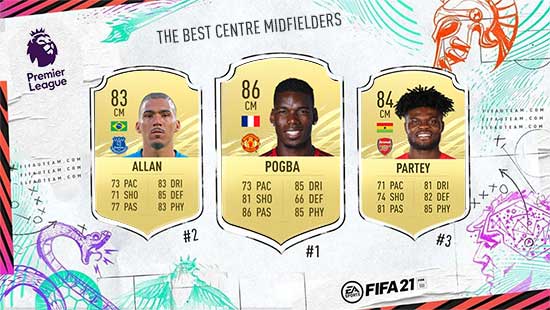 As expected, Pogba is clearly the best player for this position. He has the best shooting and passing stats. Besides that, he’s strong, fast and has 5/4 skills.

Allan and Partey were two amazing additions to this league. However, players with their profile are more likely to be an alternative to Kanté, not to Pogba. If you need someone more focused on the attack, Wijnaldum is our suggestion. You also have Thiago, who is the best with the ball on his feet, but too slow and physically weak to dispute the top positions.

With plenty of decent option from where to choose, you can adjust your players according to your needs. For example, if you need a strong midfielder, pick Sissoko; if you prefer someone more balanced, pick Van de Beek.

An attacking centre midfielder is responsible for creating chances to score. He should have a good dribbling, a decent passing, a high long shot stat and a great vision stat.
Top 10
Key Attributes
Rating
Passing
Dribbling
Top 10
Key Attributes
A central attacking midfielders need to have good passing stats, so he can assist forwards. If he is a good dribbler, he can make all the difference when the team is attacking.
Rating
Passing
Dribbling 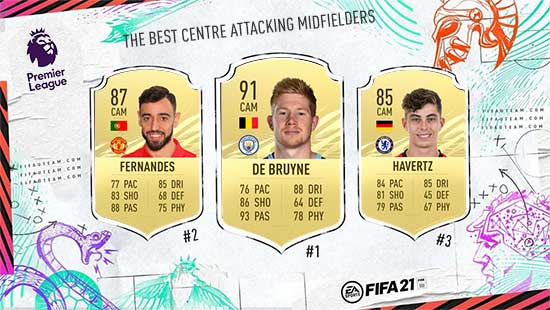 On the Premier League, there are many positions that were taken by players who are much better than the other ones. It’s the case of Van Dijk, Kanté, Pogba and… Kevin De Bruyne. He is one of the best players money can buy (or FIFA Points). The most rated Premier League player is obviously one of the most expensive and not everyone will have the chance to play with him. If it is your case, don’t get upset. Bruno Fernandes is a top-quality attacking midfielder, who has also great stats.

It’s not obvious the choice of the third-best CAM. Havertz and Ziyech are both good. The first one makes more assists, while the other one scores more goals. In our opinion, the bad weak foot of Ziyech is decisive to make us choose the German player as the best.

If you want someone more balanced, give a chance to Dele Alli. He can play as a CM. If you cannot handle the lack of pace of James, try Lingard and Almirón, both fast enough for every team.

Wingers are usually responsible for giving game width in the attack.
Top 10
Key Attributes
Rating
Pace
Dribbling
Passing
Top 10
Key Attributes
Pace is probably the biggest weapon of these players. They use it to escape opponents. However, to be fast isn’t enough to reach the opponent’s box. A good dribbling stat will help you to surpass the opponents’ players that appear on the way. When reaching the opponent’s box, the winger has to decide what to do. Normally, he decides to cross and that’s why it’s so important to have good passing stats.
Rating
Pace
Dribbling
Passing 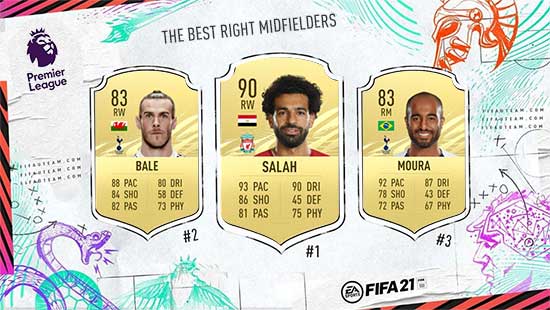 Salah is the obvious first choice for those than can pay his price. Hopefully, there are several cheaper good alternatives. That’s the case of Gareth Bale, a kind of light version of Salah. Be aware that he has a medium attacking work rate, which may not be enough depending on your needs.

In FIFA 21, only Messi has better dribbling stats than Bernardo Silva. If it wasn’t by his lack of pace (in fact, it isn’t so big), the Portuguese winger would be just behind Salah.

If you need a pacey player, Lucas is an interesting option. Obviously, you also have Traoré, the fastest player on the planet, who is also incredibly strong. Unfortunately, his shooting and passing stats are too poor for someone who plays as a winger. For low budgets squads, we suggest Raphinha, a great addition to this league.

The left wingers have exactly the same role as their team mates from the other side.
Top 10
Key Attributes
Rating
Pace
Dribbling
Passing
Top 10
Key Attributes
Pace is probably the biggest weapon of these players. They use it to escape opponents. However, to be fast isn’t enough to reach the opponent’s box. A good dribbling stat will help you to surpass the opponents’ players that appear on the way. When reaching the opponent’s box, the winger has to decide what to do. Normally, he decides to cross and that’s why it’s so important to have good passing stats.
Rating
Pace
Dribbling
Passing 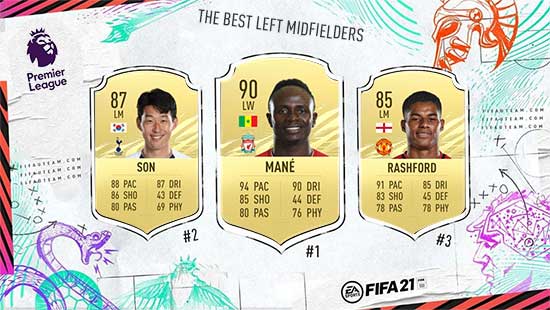 Now that Sane doesn’t play on the Premier League anymore, Mané is clearly the best left-winger playing in England. He is the third-fastest Premier League player and has also the third-best dribbling stat. It’s extremely difficult to find out who from Son, Rashford and Sterling is the best alternative to Mané. The City winger is the fastest of these three but his bad weak foot can give an advantage to the other two. In our opinion, Son wins because he scores more goals and makes more assists to his teammates. He also has an interesting high/high work range, that you may not like but we love.

Allan Saint-Maximin is very popular among the FUT community but, in our view, he’s too weak physically. We prefer Zaha and Bergwijn. However, since the FIFA ambassador only shoots with the right foot, you may have a different opinion.

We picked Diogo Jota as an affordable left midfielder but in fact, he isn’t a native winger. If you feel uncomfortable with the new Liverpool signing, replace him by Podence.
Facebook Instagram Mail Twitter Youtube
© FIFAUTeam Copyright 2012-2020 | All FIFA assets property of EA Sports