This page helps you to build your FIFA 21 Premier League squad. 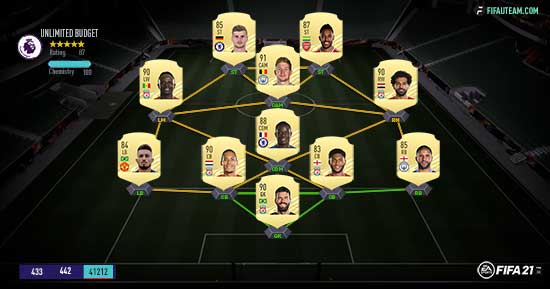 The choice for this team’s players was based on the analysis made in the position guides. To understand why we picked player A instead of player B, please take a look at those guides.

Alisson is the natural choice to the goal. Liverpool’s goalkeeper has the highest score of the most important attributes: reflexes, diving and handling.

In the right side of the defence, Walker is clearly better than Arnold or Semedo. Van Dijk is another obvious choice. He is by far the best defender playing on the Premier League. Fast and strong, he is who defends better in the entire world. His teammate Joe Gomez is the perfect match to him. In the left side, Alex Telles will make a bigger difference to your team than Robertson.

We used this formation not because it is the best for this league but because it is the standard formation we use for unlimited budget squads of our guides. This means that we have only two spots for four high-quality players. Kante and Kevin De Bruyne are incredibly good, especially in their positions: CDM and CAM. If you don’t want to relegate Pogba or Bruno Fernandes to the bench/reserves, you should pick another formation. Pogba may indeed be better than Kanté and Fernandes but not in their native positions. Another interesting player is Allan, who can easily replace Kanté while you are sill joining coins.

On the right and left side of the midfield, Salah and Mané are easy choices (even knowing that they are native wingers) but you may get a headache deciding the two from the front. It isn’t easy because, as described in the striker’s guide, there are plenty of amazing players with different skills. Aguero and Kane, for example, are great finishers but you may prefer, like most of the community, someone faster. In that case, Aubameyang, Martial and Werner are better choices.

Once all players have reached maximum individual chemistry via loyalty (achieved by each player after 10 matches for your club or by being pack pulled), you can go without a manager for your squad. They’ll be of no use while wasting contracts. 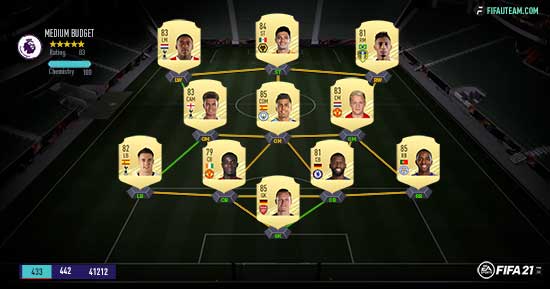 The choices for this more affordable team were based on the analysis made in the position guides. If you want to understand our choices, be sure to read those guides.

On the back, Leno will keep your goal safe. If you think he is too expensive, then you can go with Areola. Bailly and Rüdiger are solid centre backs, supported on the left side by Reguilón. Once again, Ricardo Pereira’s assertiveness completes our defending foursome.

Rodrigo is perfect to play in the centre. He has the muscle that every midfield needs and he is also good to start the attacks. Van Beek and Alli complete the midfield. On the wings, Raphinha and Bergwijn are responsible to support the striker Jiménez.

This squad was built with players which price was under 20k coins on the release date. However, if you still have some room in your budget, Ndidi, Zaha and Richarlison are players that would improve this squad a lot. With a few coins more you could also invest in Party to jump to the next level. 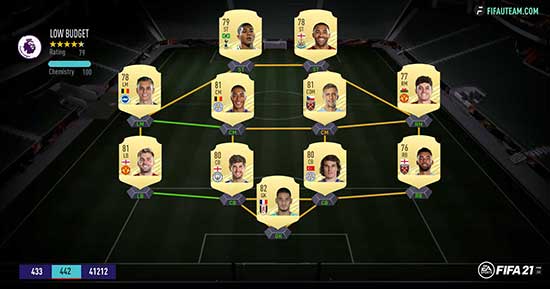 The choice for this team’s players was based on the analysis made in the position guides. To understand why were these the players selected, please read those guides.

Areola is our choice for the goal but since he is out of the budget, you may prefer to use Nick Pope. Fredericks, Söyüncü, John Stones and Luke Shaw complete the defence.

In the midfield, Tomáš Souček and Tielemans complement each other well. Both are good players but while the first gives security to the backline, the second is a player that usually pushes forward to assist his colleagues. Daniel James on the right and Trossard on the left fill the wings in order to assist Carlos Vinicius and Callum Wilson, who have both been chosen for their combination of pace and finishing stats.

There is room for improvements but you will need to save some coins. This squad was built with players which price was under 2k coins on the release date. However, if you still have some room in your budget, Tierney, Gbamin, Keita, Willian, Antonio and Calvin-Lewin are players that would improve this squad a lot.

For all those players who plan to build a FIFA 21 Premier League squad, we’ve conducted an extensive analysis on the best players and suggested squads for different budgets.
Guidelines
Disclaimer Notes
More Guides
Guidelines
Building a team is the biggest challenge in FIFA 21 Ultimate Team. It doesn’t need to be the best team, since the budget may not allow it, but it needs to be a team designed for your style and needs.

When choosing which players to play with, you will have to look carefully at their attributes. Choosing a team based on ratings is one of the most common mistakes. For each position, and focusing on the truly important attributes, we’ll show you who are the best players to choose.

It’s also important to check if the player you choose fits the formations you like to play in. For example, a good full-back will be useless if the player only uses a formation with three defenders.

Last but not least, you should try to get the maximum chemistry possible. Most of the players base their squads on a single league or nation, but the most experienced ones are able to build hybrid teams without hurting chemistry.
Disclaimer Notes
This guide is based on our perception of the game, which may be different from yours. It should only be used as an orientation, since it’s impossible to build a team that fits everyone. Besides that, there are several factors we don’t know that influence the choices, such as budget, formation, custom tactics, instructions, style of play and player preferences.


Another important point that must stay very clear to whoever is reading this guide, it’s about some criteria we used:

Only Gold Players
Silver and bronze players are not taken into account in this guide. Most of them are not good enough to replace the gold ones.

Only Regular Players
IF and special items are not taken into account in this guide. Most of them can’t be considered good value for money and should only be used by players with a good budget.

Only Normal Players
Upgraded or transferred items are not taken into account in this guide. Only players who have started their season in the Premier League and with their original attributes were considered.
More Guides
Don’t forget that we have published separate guides for each position…


…and each major league.

No league is as spectacular as the main football competition in the United Kingdom. The champions in the second biggest league in the world are made through the made points system. Whichever team gathers the most points wins the league. The top four teams gain access to the champions league of the proceeding year, while the last three trade places with the first three promoted teams from the Football League Championship. Every season starts in August and finishes in May, having 38 game weeks with 10 matches each, being a total of 380 matches per season.

The Premier League is the most-watched football league in the world, broadcasted in 212 countries and in more than 600 million homes. It’s also the second football league with more assists and the second-best league classified in the UEFA league coefficients.

Since the competition began in 1992, the Premier League has only been conquered by seven clubs. The dominant club is Manchester United, with a total of 13 titles. London’s teams together only won the league eight times while Manchester City won it four times. The outsiders Blackburn Rovers and Leicester City did it once, like the current champion Liverpool.
Facebook Instagram Mail Twitter Youtube
© FIFAUTeam Copyright 2012-2020 | All FIFA assets property of EA Sports