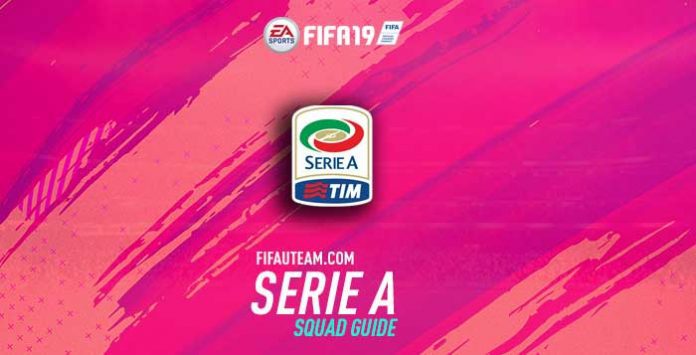 For all those players who plan to build a FIFA 19 Serie A squad, we’ve conducted an extensive analysis on the best players. Here is our guide to the top Italian league in FIFA 19 Ultimate Team.

Introduction to the FIFA 19 Serie A Squad Guide

All of these steps are necessary to have; or it could mean that the team is not always well built as it could be. This article aims to help those that want to form a FIFA 19 Serie A squad. Even the players that have a Serie A team, could take out some valuable conclusions from this guide that could help you make your team even better.

Remember that this year, we published separate Serie A guides for each position. You can visit them, clicking in the colourful links in the top of this page.

5 FLUCTUATION OF PRICES
In the chapter where FIFA 19 Serie A squads are suggested, we added a link where you can check anytime the updated prices.

The Serie A is one of the most competitive leagues in the world, but the football is not as spectacular as it is in UK, Spain or Germany.

The qualification of the champion is made through the made points system. Whichever team gathers the most points wins the league. The first three classified teams gain access to the champions league of the next year, while the fourth and fifth qualify for the Europa League and the last three trade places with the first three qualified from the Serie B. Every season starts in September and finishes in May, having 38 game weeks with ten matches each, being a total of 380 matches per season.

The Serie A is the second best league classified in the UEFA league coefficient.

Started in 1898, the Italian league has been conquered by sixteen clubs. The dominant club is Juventus, with a total of 34 titles. AC Milan (18), Inter (18) and Genova (9) are the other teams that have won numerous titles.

Serie A is a good choice for those who are looking for quality players, but don’t have a large budget. There is not many choices, but the players in Serie A are probably the best value for money.

Ideas to help you building your FIFA 19 Serie A Squad

The team suggestions that follow are simple graphic indicators of the Serie A articles already published. They should serve merely as orientation because it’s impossible to build a team that fits everyone. They depend on various factors we don’t know such as budget, formation, custom tactics, style of play and player preferences. The choice for this team’s players was based on the position guides published previously.

Handanovic is one of the best goalies you can use in FIFA 19. It’s natural to see him on our unlimited budget squad.

Chiellini and Alex Sandro are untouchables in any defence of this league. In our opinion, the other spots of the back line should be filled by Cancelo and Koulibaly. However, Manolas is also a great option. If you think that Napoli’s Centre back is not fast enough, even with the right chemistry style, then don’t be afraid to use the Roma’s defender. He is really fast and gives security to any defense.

Nainggolan, one of the most versatile FUT 19 players, is a CM but he is better than any other native CDM of Serie A. We love his high/high work rates and amazing stamina. In front of him, Dybala is another top-quality player, making this midfield the strongest point of this league.

Now something that you need to pay attention: who builds an unlimited budget Serie A squad shouldn’t pick a formation with wingers. We only did it because it’s our default formation, the one we use in every single guide. There are not many quality choices for this position. Cuadrado and Douglas Costa are the best ones. Matuidi, Sergej Milinkovic-Savic, Marek Hamšik and Miralem Pjanic are just a few examples of great players who have no room on this team because of the formation.

In the attack line, Ronaldo is obviously there but the other player depends on your preference. Generally speaking, Mertens is the first choice but only if you usually don’t cross to the box. In that case, Immobile and Higuaín may be a better choice. The choices for this team were based on the position guides that we have published before.

In goal, Szczesny is good enough to keep you safe.

Benatia and Manolas are great examples of how it is possible to build a great team without paying too much coins. Cancelo (again) and Dalbert fill the other spots.

The central midfield position of this team has to be assigned to Allan or Khedira. They build up the first barrier between your goal line and the opponent, making their physicality and defensive attributes count. Besides that, they start the attacks very well, thanks to their passings skills. Sergej Milinkovic-Savic and Marek Hamšik are not the cheapest alternatives to the two other spots on the midfield, but they add so much quality to this squad.

On the wings, Cuadrado is cheap enough to keep his spot on the team but El Shaarawy only appears here because there isn’t anyone better than him, excepting Douglas Costa, Insigne and Perisic, and all of them are too expensive to this budget. If you want to build a strong Serie A team without spending all your coins, you should try to find a formation without wings or, even better, someone from other league that won’t get low chemistry.

Icardi is the ST of this team but, if you don’t have enough coins to buy him, you can replace him by Alejandro Gómez.

If you still have some room in your budget, Perisic would improve this squad a lot. Once again, the choice for this team was based on our previous guides.

Donnarumma is cheap enough to keep his spot in the team. Kasdorp, Vrij, Juan Jesus and Criscito complete the defence.

In the midfield, Daniele De Rossi and Bonaventura complement each other well. The first one is strong, quick and aggressive, while the other one is a player that usually pushes forward to assist his colleagues. Castillejo and Perotti fill the wings in order to assist Lautaro Martínez and Luís Alberto.

Follow our tips and you’ll become more successful on FIFA 19 Ultimate Team with your Serie A Team.