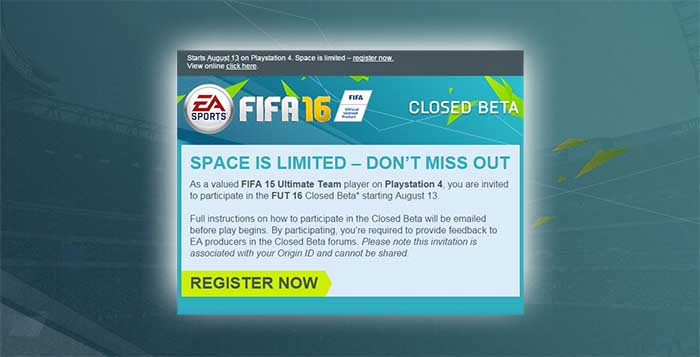 There’s a lot of secrecy revolving around the FIFA 16 closed beta. Almost nobody knows for sure what it is, how it works and how you could have access to it. Take a look at our short guide in order to stop being part of this group of uninformed people.

The beta expires on August 23rd

If you were invited and have registered with success, then you will receive
all the details to download the Beta on August 13 (evening UK)

Q: What is the FIFA 16 closed beta for?
A: The main purpose of it is to test the game. It’s for players to try out a FIFA 16 game mode and give the developer feedback on anomalies they might find, and also suggest potential alterations. This beta has also got the particularity of promoting the game itself.

Q: How does the closed beta interfere on the game’s development process?
A: Just like the previous games, FIFA 16 is a very complex game that joins several game modes together, for they’ve been developed over the years. There are several different teams responsible to develop determined projects and areas of the game that might or might not be integrated to the final product according to deadlines, the work’s quality and other economic and strategic factors. Which means that these teams are not always working for the next FIFA. The whole project must be exhaustively tested out for them to make sure it works correctly. For that, EA Sports normally invite a group of volunteers in their premises so they can test the game. After the adjustments regarding the first feedback period are made, the Alpha version is released. This is the version EA uses to show it to the public for the first time, at E3. The game’s official release occurs in the end of September and always comes along with an update that’s supposed to correct the anomalies detected after the disks are printed out. Between one thing and the other, there’s the beta and then there’s the demo.

Q: Which game modes will be tested in the FIFA 16 closed beta?
A: Pro Clubs
Career Mode
On line Seasons
Ultimate Team.

Q: When exactly are each of these game modes going to be tested?
A: Different to what happened on previous years, in the FIFA 16 closed beta all game modes will be tested at the same time, from the first to the last day. The difference is that the invites will be addressed specifically to one game mode. One player won’t be able to test more than one game mode.

Q: What do I do in order to play the FIFA 16 closed demo?
A: Only players that are invited will be able to play the beta. The only thing you can do is stay alert to your mail box (from the e-mail you use for your FIFA account) to see if you were invited or not. Pay attention to all folders, including spam.

Q: I’ve received an invite for the beta in my e-mail. How do I know it’s legit?
A: Carefully verify if the sender’s email looks like this: [email protected]ea.com.

Q: I received an invite. Does that mean I’ll play the beta?
A: No. The number of spots is limited so as soon as you receive the invite you’ll need to register in order to guarantee yours.

Q: What criteria do they follow while picking the players who earn invites?
A: There are several criteria for this selection, and the most important ones are playing time, performance in a determined game mode and registration. Only Xbox and Playstation FIFA 15 players are invited.

Q: I’ve found invites for sale. Are they legit?
A: They’re almost never legit because invites are always associated to one Origin account.

Q: By accepting the invite, what am I obliged to?
A: You’ll need to fulfil the agreement of the closed beta, which includes a confidentiality term.

Q: After I’ve been invited what do I have to do in order to play the closed beta?
A: You should click ‘register’ directly from the e-mail you received and agree with the terms of service. More information will only be viewed by you, in your e-mail, a few days after the start of the beta. If you’re accepted, you’ll be able to download the beta in the 13th of august.

Q: What does the confidentiality term consist of?
A: It basically forces the participants not to divulge any information regarding the game outside of the forum created for this purpose. Hence closed beta.

Q: What happens to those who don’t fulfil the confidentiality term?
A: They’ll lose access to this beta and to any other that’s released afterwards. Other measures can be taken for cases that are more serious.

If you’re one of the lucky ones that will get to try out FIFA 16 before everyone else, congratulations. Have fun testing the FIFA 16 closed beta and try making this game even better.