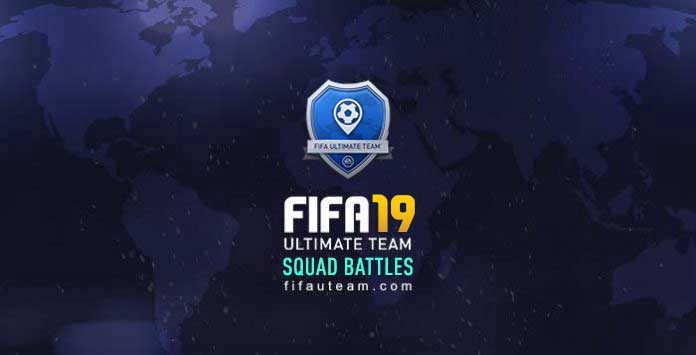 Squad Battles is a game mode within FIFA 19 Ultimate Team, that rewards the best single players with amazing prizes. On this Squad Battles guide for FIFA 19, we will explain everything you should know about it. Compete and earn rewards in this single player mode. Take on other squads from the FUT community, to earn rewards and move up the leaderboards.

Squad Battles can be explained in three steps:

1 WEEKLY SINGLE-PLAYER COMPETITION
Compete against Squads from around the world in Squad Battles. Play up to 45 single-player matches per week to climb the leaderboard and earn rewards.

2 PLAY AGAINST COMMUNITY CREATED SQUADS
Every day, new opponents are available to match up against, each squad made by someone in the community. More difficult squads offer increased rewards.

To start playing Squad Battles, you just need to enter in your Ultimate Team, go to Single Player and select Squad Battles. You can check the following image if you are not sure about how to do it.

What is the difference between Squad Battles and FUT Champions Squad Battles is being named the FUT Champions offline, because it has a few things in common. However, there are also big differenced between them, that will help you understand how this game mode works:

☑️ SQUAD BATTLES IN A SINGLE PLAYER GAME MODE
This is the most important difference. Not eveyone likes to play online. The single player game is different and there is much less pressure. Besides that, for who doesn’t have a great connection, Squad Battles is a good alternative.

☑️ SQUAD BATTLES HAS LESS MATCHES ON THE WEEKEND
Who plays Squad Battles has the weekend free to do other things because the games are more spread by the days of the week. You don’t need to play all your games in 72 hours.

☑️ YOU DON’T NEED TO QUALIFY FOR SQUAD BATTLES
There are many people who never played the popular FUT Champions because never achieved to get a qualification. This doesn’t happen on Squad Battles because everyone is invited. You just need to enter and play. As simple as that.

☑️ FUT CHAMPIONS HAS BETTER WEEKLY REWARDS
While not as lucrative as FUT Champions, Squad Battles offers worthwhile prizes every week. At least, it is by far the single-player mode with better rewards.

☑️ SQUAD BATTLES DOESN’T HAVE MONTHLY REWARDS
This is another big difference between these two game modes. Do you know the special untradeable cards every FUT Champions player receives when the month ends? Well, in Squad Battles you don’t have that…

How Does Squad Battles Work?

How do you rank, leaderboards and more details about Squad Battles for FIFA 19 Ultimate Team

As you already know, on Squad Battles you compete and earn rewards in the new FIFA Ultimate Team (FUT) single-player mode. But how you do it? We will explain it now.

In Squad Battles, your rank is determined by battle points. You earn them by playing matches. You can take on other squads from the FUT community to earn rewards and move up the leaderboards. The criteria for each rank is based off all the player’s results who are taking part in a Squad Battles event. Each Rank can only hold a certain percentage of the players competing in Squad Battles during the current weekly competition. This means your rank could constantly change throughout the week as the criteria for each rank adjusts as players play through the mode. The percentage breakdown of each Rank can be seen in-game.

If you start off playing Squad Battles matches early in the week and earn a lot of Battle Points, you might initially be in a top Rank. But if you don’t continue playing matches throughout the rest of the week or earn less Battle Points, other players could still be playing and earning Battle Points. That means your Rank could drop, if they out-earn you and move up. On the flip side, you could also move up a Rank if players don’t out-earn you.

It’s time now, to explain to you the Squad Battles menu. It has four windows:

1 FEATURED SQUAD
This one is refreshed weekly. We will explain it in the next chapter.

2 OPPONENT SELECT
This is where you set the difficulty level and pick the opponent you will play. You can see his squad, formation and tactics. If you already played against him, you will see the final result. Four new teams are added every time you click on the ‘Update Opponents’ button (if available).

3 YOUR RANK
This is where you can see how well you are going and which rewards you can get. Just like in FUT Champions, you have several tiers, that goes from Bronze 3 to Elite 1 and also TOP 100. Remember that the event only ends on Sunday night, so your current ranking is not the final one.

4 TOP 100
This is where you can see who are the best Squad Battles players in that moment. As we explained, the rank is determined by battle points. Who has more battle points, gets the first position. If two or more players have the same points, the player with fewer games played gets the higher position. The leaderboard updates every five minutes.

Understanding the Squad Battles opponents and the opponents update feature

In Squad Battles you can play against two kinds of opponents:

☑️ OTHER SQUADS FROM THE FUT COMMUNITY
Four new teams are added every day. Because this mode changes from minute to minute, you and your friends may get different squads.
Your AI-controlled opponents in Squad Battles come from the real Squads used by other players in FUT. Specifically, Squads that were used by players when playing Squad Battles, Draft (Online and Offline), FUT Champions and Division Rivals.

Games carry over for 1 turn. If you miss a day, you are still able to play the four matches of that day. In order to do that, just be sure that you don’t press the ‘Opponent Update’ button before you play them. As soon as you press R1/RB, the opponent’s list is refreshed. However, if you update your opponents too late, you may be missing the games of a few days.

When a set of opponents is provided, either at the start of a new Squad Battles competition or when you perform an Opponent Update, the game always provides one Squad from each of the three Squad difficulty buckets: Easy, Medium and Hard. Then it selects a fourth Squad from either the Easy or Medium buckets, with a 50% chance of the Squad coming from either bucket. Each Squad in FUT has both a Team Rating value and a Chemistry value. When those values are added together, you end up with an Overall Squad Rating. Each of our difficulty buckets in Squad Battles contains a range of Overall Squad Ratings:

When will you be able to play against your opponents?

In Squad Battles you are limited to play up to four matches per day, except on the weekends. To make the things more clearly, we will show you the times for each day.

Be aware that, if you are in the middle of a match and the event ends, that match won’t get tracked.

How can you earn points? Your rank is determined by the total battles points you get in a single week. You earn them playing matches.

TEAM RATING SCORE
The Team rating score depends on the team you are playing against. Basically, it is based on its chemistry and its team rating, according to the following formula:
(Team Rating x 3) + (Chemistry Rating / 2)

MATCH RESULT
There are only two match results possible on Squad Battles: you win, and you get 200 points, or you lose, and you get 50 points.

SKILL BONUS
Skill Rewards are the sum of bonuses performance and penalties performance. Player’s good performances are rewarded with squad battle points, while there will be point deductions for negative performances. In other words, are the sum of the bonuses by scored goals, shots on target, successful tackles, corners, clean sheets, pass accuracy, possession and man of the match and the sum of the penalties by against goals, fouls, cards and offsides according to the following table that shows the number of points awarded/deducted for each performance:

GOAL BONUS
Each goal you score gives you a different ammout of battle points based on the difficulty level you choose.

What can you win in FIFA 19 squad battles? Squad Battles rewards are released a couple of minutes after the competition closes, upon which the leaderboards, and Squad Battles game mode will reset, and start again for a new week. We already said that you’ll get your rewards as soon as the event ends but, to make your job easier, here are the squad battles rewards dates and times:

If you want to know what the Squad Battle rewards are, you just need to click here and see.