A goalkeeper task is made easier if in front of him are quality central backs. Their function is to stop the opponent from getting dangerously close to your team’s goal.
Top 10
Key Attributes
Rating
Defending
Physical
Pace
Top 10
Key Attributes
On a centre back, two attributes assume particular importance on their performance: defending and physical.

A player with good at defending will have higher chances of dispossessing the opponent and avoid him reaching his box. The physical attribute measures how likely the players are to win possession with their body.
Rating
Defending
Physical
Pace 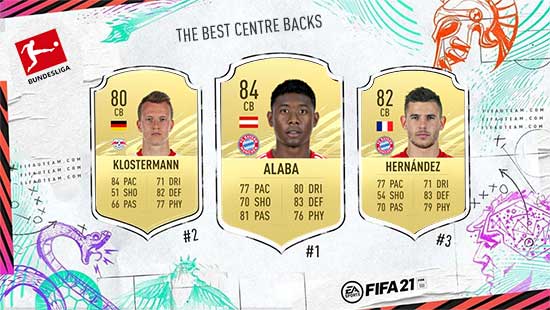 Alaba and Klostermann are, in our opinion, the best centre-backs playing in Germany. Both defend very well but, while the Bayern defender is a complete player (80+ in passing, dribbling and defence), Klostermann standouts by his amazing pace. He is the fastest gold CB of the entire game.

Lucas Hernández and Upamecano are the best alternatives. Our preference goes to the first one but his high/high work rates are far to be good. If you feel more comfortable, the young player from RB Leipzig may be a better option.

Hummels is too slow for most of the players. We only recommend him for teams with three centre backs. In this case, the pace of the central CB is not so important.

As defenders that they are, they should have good defending capacities. This reduces a team’s risk of conceding. A flanked game tends to be faster than a game based in the middle of the field. The players that fill these spaces need to be fast, both penetrating defensive and attacking moves of the team.
Rating
Defending
Pace 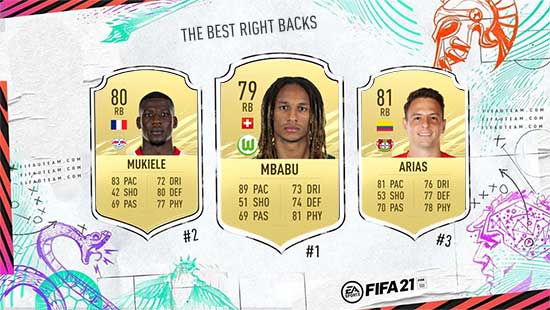 Kimmich and Piszczek were the best Bundesliga right-backs in the last years but now they play in other positions. It means that this league doesn’t have any top-quality player to play on the right side of the defence. Mbabu and Mukiele are, in our opinion, the two best. The first one is faster and attacks better, while the other is more suitable if you want more focus on the defence.

Arias and Meunier are decent alternatives. If you want someone to just stay on the back, Lars Bender may be an interesting choice. He is very slow, so he can only be used in certain circunstances.

Left backs have exactly the same role of their team mates on the other flank. In other words, they try to make a winger’s job hard and participate in the team’s offensive manoeuvres.
Top 10
Key Attributes
Rating
Defending
Pace
Top 10
Key Attributes
Defending and pace are very important attributes for any left back. 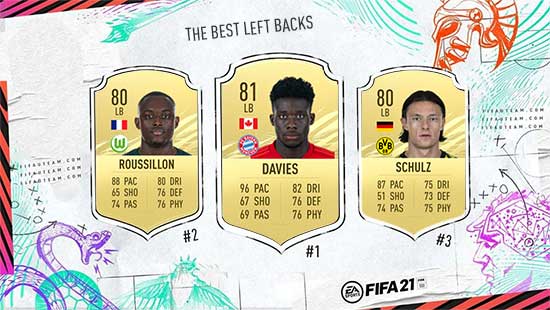 Alphonso Davies is, in our opinion (and probably almost everyone’s opinion), the best left-back playing in Bundesliga. He is the one with the best pace and dribbling stats. Roussillon is a decent alternative to him. He’s very fast and consistent on both attack and defence.

Schulz and Günter are also decent choices. The first one is better but doesn’t justify such a big price difference. Halstenberg is who defends better but don’t count with him on the attack despite his high attacking work rate. He’s too slow for a fullback.
Facebook Instagram Mail Twitter Youtube
© FIFAUTeam Copyright 2012-2020 | All FIFA assets property of EA Sports