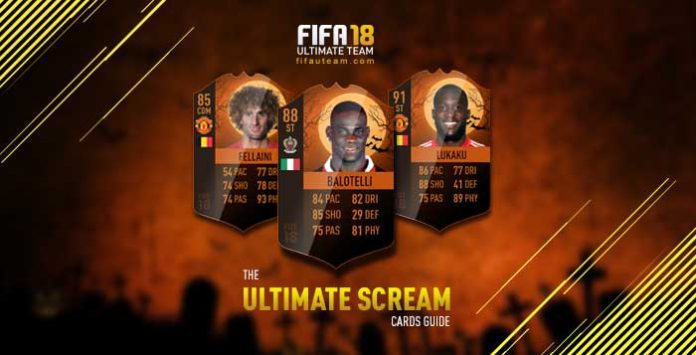 FIFA 18 Ultimate Scream cards are awarded to a selection of scream players and released all at once in a single FUT squad of 23 players. Let’s learn something more about these Halloween themed players cards released for the first time on FIFA 17.

What is a FUT Halloween card?

To celebrate the Halloween, Electronic Arts introduced in FIFA 17 a brand new card. These cards are assigned to a selection of players chosen based on exceptional real world performances, records and FUT attributes, and released all at once in a single FUT squad of 23 players.

The Ultimate Scream cards become available in packs for a week. During this period, which starts at 6pm (UK time), these cards replace the corresponding regular not coloured cards. In other words, in the week a player gets his Halloween card in packs, it is impossible to find his regular card there. Your odds of pulling one of these cards from a pack are exactly the same of pulling the day 1 card of that player in another time.

If you own the regular card of a scream player, your card will keep unchanged. If you want the new version, you will need to buy the corresponding version in the market or pull it from a pack in that week. When the Ultimate Scream will be available?

The Halloween cards are released once a year during the Halloween promotion. In FUT 18, we estimate that they can be added to FUT packs between 20 October (Friday) and 29 October 2017 (Sunday). However, because of the potential but very unlikely TOTY release, the Ultimate Scream cards release date for FIFA 18 is not confirmed yet. 23 Ultimate Scream players are released in packs with upgraded ratings as unique items. However, these upgrades will only be available during the Halloween period (29 October to 1 November) and at spooky times throughout the season, like from November 3 to November 5. These temporary boosts come to an end on November 1st and their ratings revert back to match their initial release upgrade. After the Halloween period, the only difference between the Halloween cards and their respective original NIF cards is the colour and a small boost.

The ratings and attributes of FUT 18 Ultimate Scream cards are boosted up to ten points, compared with their regular cards.

What happens to the Halloween cards’ prices?

These new cards are sold for a higher price in the FUT transfer market because of four main reasons: many people like to collect them; the discard price of these cards are the same one of in form cards; they are slightly better than the day 1 cards; and most of all, to fulfil the special squad building challenges. The FIFA 18 Halloween cards will be more expensive as soon as they are released and their price will progressively drop over time.

Since this is the first promotion of the season, most of the prices will have a slightly drop. Q: Can a Ultimate Scream player’s rating change?
A: No. The ratings and stats of the FIFA 18 Halloween cards are always the same, except during the Halloween period (October 29 to November 1) or specific times during the season.

Q: How can I get one of these cards?
A: You can get a Halloween card in the same way you can get any other card: on packs or on the transfer market. If you want to try your luck on packs, you can go to the store and buy them with coins or FIFA Points.

Q: How easy is to find FIFA 18 Ultimate Scream cards in FUT packs?
A: Your odds to find a specific Halloween card are the same of finding the respective day 1 card in another time.

Q: In which FUT packs I can find FIFA 18 Ultimate Scream cards?
A: FIFA 18 Halloween cards can be found in any pack with players cards. Obviously, the chances of finding one of these cards are higher if you open a pack which contains more player cards.

Q: It is possible to get a Halloween card when opening a free pack like the ones of the Objectives?
A: Yes, it is.

Q: I have the day 1 card of a Halloween player. Why my card hasn’t changed?
A: Because the cards don’t change. You will need to buy the new card if you want the special version of that player.

Q: Are Ultimate Scream Players tradeable?
A: Yes. You can list the 23 Ultimate Scream players on the transfer market. When they receive their temporary boosts over the Halloween period and at spooky times throught the season, you can still trade them but they will return back to their original initial upgraded rating on Nov 1st.