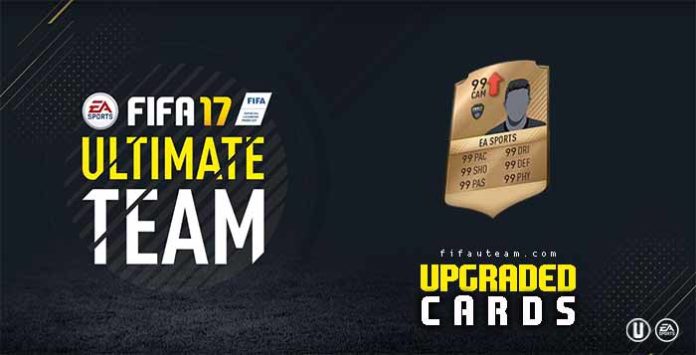 FIFA 17 Upgraded Players Cards are released twice a year to improve the stats of the best players of the season. Let’s learn something more about these cards that are released during the FUT 17 Upgrades season.

What is an UP card?

Different to what happens on other game modes, and excepting the Ones to Watch cards, the FUT players aren’t automatically updated throughout the season according to their appearances in real life. Some may receive In Form cards, but most players remain with the characteristics they were given at the start of the season. In Ultimate Team, upgrades are made through the release of new cards in two specific times: Summer and Winter upgrades. When a player is upgraded, the cards that start coming in packs have got the new ratings and attributes according to their performance on the real life pitch.

To each player who is upgraded during the FUT 17 upgrades season, it is assigned a new regular card which becomes available in packs until the end of the game, replacing the correspondent day 1 regular card. In other words, as soon as the new card is inserted in FUT packs, the old ones can only be found in the existing clubs and in the transfer market. Your odds of pulling the new card from a pack are exactly the same of pulling the original regular card before the update.

If you own the day 1 card of an upgraded player, your card will keep unchanged. If you want the improved version, you will need to buy the corresponding new card in the market or cross your fingers when opening a pack.

When FIFA 17 Upgraded Players Cards will be available?

As we already have explained, it is not possible to improve the stats of any regular card. However, if a player stands out in the real world, in such a way that his card becomes strongly outdated, Electronic Arts comes to justice introducing a new type of card. In Ultimate Team, upgrades are made through the release of new updated cards in two specific times: Summer and Winter upgrades. The first one happens within the transition of one FIFA to another looking to reflect the player’s evolution between two seasons. The second one, in February, rewards the players who stood out the most along the first half of the season with the release of new improved cards.

The Winter upgrade cards are usually assigned to the players who have played well in a consistent way throughout the first five months of the season, not only in few games, showing that their old regular card was really outdated. We estimate to see these cards available in FUT 17 around February 10, 2017 in four different batches, one per week. As soon as upgraded cards are released, they replace all the respective regular cards that were supposed to be released in packs until the end of the game. That is, the only card you will find in packs is the new one but you may find both cards in the transfer market.

FIFA 17 Upgraded Players Cards are physically identical to the originals, except on rating and stats.

The Summer updates take place when FIFA 17 is released. More than 9,000 players ratings and stats are updated. The biggest rating boost can go as far as 30 points but players can also be downgraded.

The Winter upgrades affect around 350 ratings that cannot go down. The gold cards are usually improved in 1 or 2 points, which is explained by the fact that they are only assigned to players who had a marked development and not to minor adjustments. Silver and bronze players are usually upgraded by at least 4 points, while in exceptional cases this upgrade can sometimes reach 15 points. The higher is the original rating, the lower is the boost.

It is rare but the position of the players in these cards may change if, they played really well in a different position.

The things get more complicated when we try to explain what happens to IF cards during the FUT 17 upgrades. Different to what happens with the NIF cards, the IF cards released before the upgrades will be upgraded in the same proportion as those (but automatically) if an upgraded player’s new OVR rating equals or surpasses his existing first in-form’s rating. When an upgraded player with an existing IF gets upgraded across Quality tiers (eg. Silver to Gold), his lower-quality IF will not get an upgrade. According to EA, this is so “the IF card’s value and bronze/silver squads are not negatively affected”. The goal is to preserve the in-form’s high value.

What happens to the UP cards’ prices?

As we would expect, as soon as the FIFA 17 upgraded players cards are released their price stays fixed way above the regular ones. These, on the other hand, start their way down. Also, with time the UP cards lose value once their quantity starts being superior to the rest of the cards. The price difference between the UP card initially and the regular card depends on many factors, such as the number of rating points gained, stats bonuses or an eventual position change.

When the player already has at least one IF card, this card is improved in the same proportion as the regular. There are people who choose the risk to invest in IF cards of players that have good chances of receiving an UP in advance because they know that in case that happens the return will be enormous. The bigger the player’s rating and popularity, the bigger is the IF card’s appreciation. In some cases profit can surpass 300%. At a long run, the cheapest cards lose value, while the most expensive ones slowly have their price increased. If you’re thinking about investing in these cards, be careful not to bet on the cards that are already being way too speculated. It’s just that sometimes the speculation is so big around determined cards that, after the upgrades, the improved IF cards’ market prices are inferior to what they were before the announcement. On the other hand, if you have a NIF of a player you think is going to receive an upgrade, it may be a good idea to sell him in advance so you minimize the loss.

In the coming weeks, we will add a much deeper explanation to what will happen to the FIFA 17 Upgraded players cards prices in the market.

Basic information about the cards of FIFA 17 Upgrades

Q: What is the a UP card?
A: It is a non-day 1 regular card that updates the ratings and the stats of the most inform players.

Q: What happens exactly if a player receives a Winter upgrade?
A: When a player is upgraded, the cards that start coming in packs have got the new ratings and attributes according to their performance on the real life pitch.

Q: Who chooses the players to be upgraded?
A: A dedicated team from EA Sports.

Q: How long are FIFA 17 Upgraded Players cards available in FIFA packs?
A: As soon as they are released for the first time, they remain in packs until the end of the game, replacing the day 1 cards.

Q: If I have a card of a player that is to receive an upgrade, will this card get upgraded?
A: No. It remains exactly the same, with the original rating and attributes that were defined initially in the game.

Q: Can a player change categories if he is upgraded enough for that to happen?
A: Yes. As long as the upgrade gives him enough points for that, a player’s NIF card can go from bronze to silver or from silver to gold. The IF cards never change category, though.

Q: Why are there some In Form cards that didn’t receive an upgrade although their NIF did?
A: First because probably the upgraded player’s new OVR rating does not equal or surpass his existing in-form’s rating. If it does, then it is because the upgraded player with an existing IF gets upgraded across Quality tiers (eg. Silver to Gold).

Q: Why wasn’t a certain player’s IF card upgraded if his NIF and UP were of the same category?
A: Probably because that IF card already had the maximum rating for its category: 64 or 74.

Q: It is possible to exist two regular cards of the same player with different ratings?
A: Yes. That’s what happens when a player receives an upgrade, two cards start coexisting: one corresponds to the start of the season and the other has got improved ratings and attributes.

Q: When there’s an upgrade, which cards are the ones that come in packs?
A: The new ones.

Q: Which cards are released first: transfers or upgrades?
A: Transfers.

Q: Do all upgraded players get a new card?
A: Yes. Although, if you own a regular card of a player that was upgraded there won’t be any alterations.

Q: The NIF and TOTW cards are the only ones to be upgraded?
A: No. Every single IF card has the chance to be upgraded, which includes for example the Heroes and Record Breaker cards.

Q: How can I predict which players have good chances of receiving an upgrade card?
A: Even if you don’t keep up much with the real life football, there are two indicators to help out in this prediction: the number of a player’s IF cards; constant rating upgrades on H2H.

Q: Can a player be downgraded?
A: The players’ ratings and stats are only looked at to be lowered between one FIFA to another. During the Winter upgrades, no player is downgraded.

Q: Can a transferred player receive an upgraded card?
A: Yes, he can. Although EA Sports try separating player transfers/player upgrades, there are rare cases in which the same player is both transferred and upgraded at the same time. In that case both situations are passed on to one single card.

Q: What advantage do the FIFA 17 Ultimate Team upgrades bring us?
A: The upgrades increase the squads’ quality level, diminishing the differences between the game and real life football. Besides, they can also represent good trading opportunities, mainly when it comes to IF cards.

Q: I already have a squad. What is it good to me?
A: If you’re already “done” with your squad, the upgrades increase your improvement opportunities. If your squad is based on a league, for example, upgrades can improve the players you already have or they can promote others for a position or two.