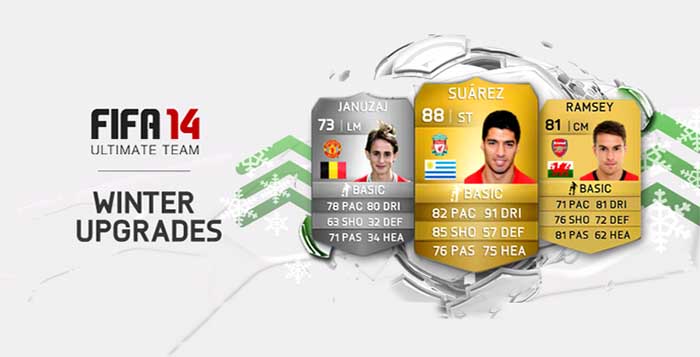 Suarez have a new card ! And he is not the only one with an improved rating.
Check out the complete list of FIFA 14 Ultimate Team Upgraded Players Cards.

The upgraded players card, also known as UP cards, are usually launched in January or February with the goal of adjust the players’ rating and players’ attributes to the reality. Only players that have played much better than their FIFA 14 Ultimate Team rating have the chance to get an UP version.

There are some new rules about these UP cards that you should know.
As usually, upgraded players cards will be released in packs from this point forward but if someone have a card with a old overall it will not be updated. Cards with old overall no longer will be available in packs.
What is different this year has to do with the IF cards. Now, if an upgraded player already has one or more in-forms, all of his IF’s will be upgraded respectively. This is true to new cards released in packs but also for all existing cards. There is only one exception: if a player is upgraded to the next category, his IF cards stays on the same category. Only 87 players got UP cards. Here it is the complete and final list of FIFA 14 Ultimate Team upgraded players cards: