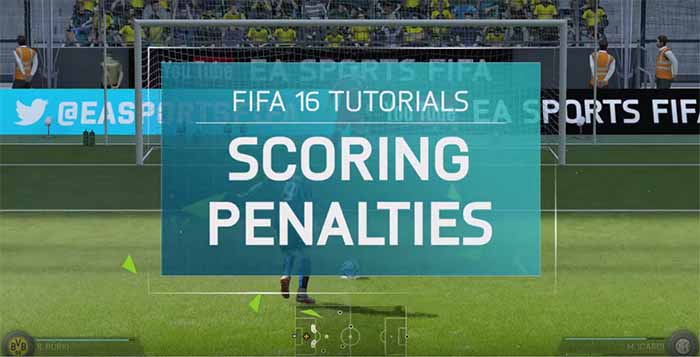 If you want to have success into the pitch, you must to know the basic controls of the game.
In this tutorial we will share with you the best FIFA 16 tips about how to score a penalty kick.

When taking a penalty kick, make sure you have the right man for the job by selecting a player with the best penalty stat. It will gives yourself the best chance of scoring.

When taking a penalty, it’s important to weigh certain decisions before taking the shot. Getting the correct timing in the composure bar, the amount of power used, and direction of the shot are all important factors in scoring from the penalty spot.

vTry to stop the composure bar in the middle of the green area for maximum accuracy.

Beware of the risk vs reward of hitting the ball harder. The more power you put on the ball, the less accurate it will be. Aim where you want to place the ball when powering up. Aim for the corners and the keeper will have a harder time saving even if he goes to the right way.

Practice penalties in the arena to see how the aiming reticule moves invisibly in a real game. Above all, make sure you hit the target. As the penalty taker is you who have the advantage.

Here they are the main highlights about how to score a penalty kick on FIFA 16:

– Your success when taking a penalty kick depends basically on three factors: aiming, power and direction
– The objective is to hit the green spot, the centre of the bar
– Try filling the power bar with something between 2/4 and 3/4 of its full length
– Hold the left stick to the direction you want for about one or two seconds and then release
– Players with a high penalty stat are more likely to score