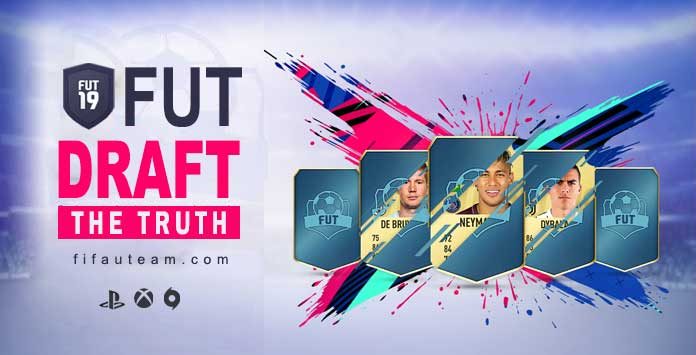 FUT Draft has lost popularity since other more competitive game modes, like FUT Champions and FUT Rivals, were released. Most of the community thinks that FUT Draft rewards are not good enough. We will show you here if it is worth playing FIFA 19 FUT Draft or not.

Is It Worth Playing FIFA 19 FUT Draft?

All the truth about FUT Draft

FUT Draft was released for the first time ever in FIFA 16. Its promotion was extraordinarily well made. FUT Draft was everywhere: at E3, Gamescom, on the demo and in every single review. Everyone wanted to play FUT Draft and EA wanted to see us playing it. However, something has changed. In the following years, EA introduced FUT Champions first and then FUT Rivals, both with much better rewards than we were used to, and people started asking if it still made sense to play FUT Draft. Let’s find out. We only get tempted to try FUT Draft when EA promised that we’d get our investment back even if we lose the first match. EA’s marketing department tried to make it look like we’d have nothing to lose, but that’s not the truth. Using the feedback from our followers, we have built the largest list of rewards and used that list to find out if it is worth playing FIFA 19 FUT Draft or not.

It’s important to note that we have only analysed the online mode rewards. It doesn’t make sense to do the math for the single player rewards since they are too bad and anyone can easily conclude that it doesn’t worth play it. Don’t forget that the difficulty level only affects the coins you receive at the end of each match, just like it happens in any other game mode. Even if you are a top player and want to avoid the balanced opponents from online matchmaking, you shouldn’t play ‘offline’.

For each performance (wins per campaign), we have built a table showing how much you can get when selling your rewards. As you know, for the same tier, you can win different rewards, with very different values. For that reason, we added the maximum and the minimum values to the table, and not just the average value. Besides that, you can also expand the tables to see the details for each reward possible.

As you can see below, you will need to win all matches in order to have a guaranteed profit (in fact, even winning everything possible, there is a small chance to receive less than what you have paid to play!). Depending on your luck when opening packs, you may get more than the minimum selling price but, in most of the cases, you will need to win at least three matches to make it worth playing FIFA 19 FUT Draft.

If you look at these numbers carefully, you’ll see that FIFA 19 FUT Draft can indeed be fun, but not for your wallet. Within these rewards, there’s quite some variations. For example, if you achieve a four-win streak, you can get rewards starting at 55k worth of packs and going until 135k. One way or another, it is far from being a cost-effective game mode. In average, a player needs to play FUT Draft sixteen times to win the best rewards once.

‘Don’t like it, don’t play it’, you might say (fair enough). We have nothing against EA creating a game mode in which people have to pay to play. What we don’t accept is all the false advertisement around it, claiming that you have nothing to lose.

Unfortunately, there is more. Your rewards are not delivered in coins but in FUT packs. As you probably know, it’s better to have the money in our pocket rather than anything else. Having the coins, you can decide what to do with them. Not the same with packs. When you lose the first match, you receive packs worthing around 14k coins. That’s less than the 15k fee you have to pay to play FIFA 19 FUT Draft. You better be confident you’re gonna win.

You may be thinking that it would be really unlucky to lose your first match, right? Well, this is just maths. The chances of winning an online match are, in theory, 50%. It’s no secret: in a game there’s only one winner. The other one loses. Which means that, for someone win four matches in a row, at least four people have to lose. It could be sixteen but let’s assume that you can face players who are in different stages than yours. Do you wanna keep doing the maths or is it getting complicated? We’ll break it to you: on average, what is most expected is that you win only one match per participation rather than two, which is what we’re led to believe (read this part again!). So what’s the average reward for a situation like that? Save your time and look to the second table. As you can see, you will receive packs worthing more than 20k coins, but most likely they will not be good enough to pay your fee. After all, if you stop and think for a moment, EA isn’t usually that generous, right?

If you are thinking “I’m good enough to achieve a nice win streak”, please keep with us. Okay, we believe you are good, after all, you’re not just another casual player. However, don’t forget that the game will always try and match you with someone with a winning history similar to yours. In other words, no matter how good you are, your chances are always around 50% in every single match. Wanna go back to the maths in order to know what are the chances and how much the packs you get according to your online performance are worth? We’ll help:

Knowing the average probability of finishing in each tier, we can calculate how well a FUT Draft campaign is expected to be. For example, in average, you will receive packs worthing in average 24k coins for each campaign you play. Now let’s see EA’s part of the deal. This game mode is still very lucrative for the company. After all, selling packs is their core business and with FUT Draft they are constantly ‘selling’ it. Every time someone plays, whether he wants it or not, he is buying packs. He pays the fee and receives packs as rewards. Guaranteed profit for EA. It reminds us of gambling houses. You win, your opponent loses, EA win. You lose, your opponent wins, EA win. The connection is lost, both lose, EA win double. Who wouldn’t want a part in a deal like that? And don’t forget that FUT Draft is also the only game mode where FIFA Points are sold directly!

CONCLUSION
Is it worth playing FIFA 19 FUT Draft? It can be a fun game mode, where you can control squads you are not able to afford in other game modes. However, if you play FUT Draft because of its rewards, you shouldn’t do it anymore. Most of the times, the fee you will pay to play will be higher than the coins you will make with the rewards. We strongly recommend you spend your time playing FUT Champions, Rivals and Squad Battles instead of FUT Draft.
The average cost-to-resell ratio of this game mode is 0.58 coins/coins and 58.22 coins/FIFA Point. These ratios are both higher than the ones you get when buying packs, which means that playing FUT Draft may be a decent alternative when the best promo packs are not available on the FUT store.