Home FIFA FIFA 18 It Is Worth it Buying FIFA 18 Packs? 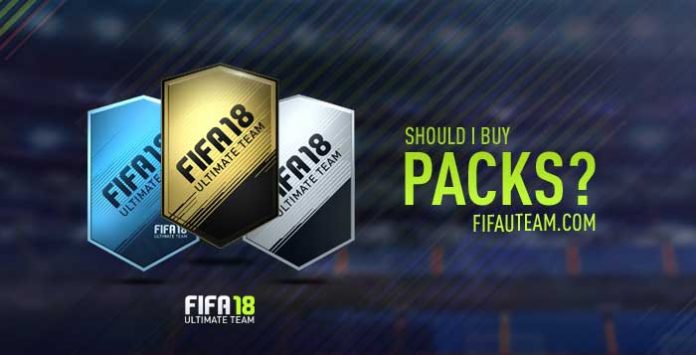 Before you buy FIFA 18 packs, you should ask yourself if you should do it or not. This is probably the most common question about FUT 18 and we are here to clarify you. Everything you need to know to take the right decision: advantages, disadvantages, odds of pulling a good card, studies and much more.

Should I buy FIFA 18 packs or not?

When you make a purchase, you are giving something to get another thing in exchange. If you bought it, it is because in your opinion the thing you are giving is less important than the one you are purchasing. The problem in Ultimate Team is that you do not know what is inside the pack you are buying. There is no way to know if the exchange will be profitable to you. You have expectations in relation to the purchase but you do not know if they will be met.

It is possible to pay packs with coins or with FIFA Points. In the first scenario, your expectation is to pull cards whose market value exceeds the price of the packs. In other words, you want to make profit. This rarely happens. That’s why buying packs with coins is an awful idea.

When you buy FIFA 18 packs with FIFA Points, the chances of getting good cards are exactly the same, but instead of investing your coins, you are using real money. It’s like you were buying FIFA coins but you don’t know how much you will have to pay for them. In these cases, only you can say if it is worth to buy packs or not, depending of how much real money you are willing to spend.

Is there any study about this subject?

It isn’t easy to make a reliable study about this subject because it only works with a huge sample. Imagine, for example, that you open packs worth 3 million coins. If you open an extra pack and pull a Ronaldo card, your conclusions will be completely distorted. It is not possible for a single person to open enough packs to conclude if it is worth to buy packs or not. We did it but we combined our results with the community experience to conclude that, in a general way, you get back 60% of what you have paid by the packs. The other 40% are EA’s profit, ie, your loss. The same happens in the famous bookmakers sports scores where part of what you bet reverts automatically to the house, regardless of the result. Usually, they keep with something between 10 and 15%, but EA is not satisfied with less than 40%.

This first conclusion allows us to be sure about how bad a strategy it is to buy FIFA 18 packs with coins, except if you are someone really lucky. This study also helps us to calculate how much you will get back when you open packs bought with FIFA Points.

So how do we make this calculation? First we use the packs prices. In average, the packs you buy with 1000 FIFA Points can also be bought with 50 thousand coins. Since you only get back 60% of your investment, in fact you will be buying 30k coins with those FIFA Points. We also know the average prices of FIFA Points which means that it is not difficult to conclude that 100 thousand coins can be indirectly purchased with £26 or 30€. It’s up to you to decide if this is an high price or not to strengthen your team and your FUT account.

Obviously, when you decide to buy a pack you do it because you are dreaming with pulling a few amazing cards. You don’t do it because of profit. There is always a hope. However, if you make a study like we did you will realize that your chances of getting good cards are low. Since you can buy cards directly in the market, the importance to this study is to know how much the FIFA 18 packs are worth. That’s the only way to compare with your investment. Are many people getting success with packs?

No. The most experienced Ultimate Team players agree with us about how bad of a strategy it is to buy FIFA 18 packs. But there are still many less experienced players with another opinions. They are asking right now why are there so many people showing of the fantastic cards they have got in packs? Maybe because no one likes to show off rubbish and useless packs. If only good packs are shared, it gives the idea that all the packs have good cards. Nothing less true.

Many players also think that the only way to be millionaire is buying FIFA 18 packs. They find other players on the market that are selling several very expensive cards and they think they got the money buying packs. They don’t. They probably are really good traders or have used scam techniques.

Obviously, there are many players that already know that buying packs is not a good strategy. But that doesn’t mean that they give up from buying FIFA 18 packs. Why? First because our brain is always trying to find the path of least resistance and finding ways to give as less effort as possible. Then, because the need of being better, more popular and integrated in a group. This may seems a weird answer but the specialist Gonçalo Cunha explains this very well in this fantastic article. You must read it.

The odds of getting Messi in a pack are like 1 to 80,000 for each card player you open in a pack.

Is EA Sports forcing me to buy FIFA 18 packs?

Yes. Don’t forget that this is the FIFA core business for EA Sports. Think about it. To sell more packs, they try everything. They use a very aggressive marketing strategy, trying to give the impression that it is easy to pull good cards in packs, using their social networks to show players that got a good card or supporting the most lucky YouTubers that publish videos opening packs with the greatest players. On the other hand, they don’t add good cards to packs, forcing players to try their luck again and again hoping to get the same good cards that other players and youtubers got. Happy Hours are strategically chosen and they even created an extra chemistry point – loyalty bonus – to force you to buy more packs.

Are you seeing how it works? Youtubers want to be famous and to be supported by EA Sports, so they produce videos showing how easy is to get good cards in packs. Those who have the luck of getting good cards in FIFA 18 packs also want to share it with the world, to show their happiness or simply to make others jealous. They share it with EA Sports and the company share it with the world. All we see are good cards in packs, so why don’t we do the same. We buy one, two, three, four packs. ‘Maybe in the next one’, we think. Most of the times, players spend part of their coins or a good amount of money and they don’t get a single good card.

Are you saying that I should not buy packs?

The decision is yours…

We are not saying to not buy packs any more. It is important that people keep buying packs. First because they are paying the Ultimate Team mode (in the first year it was paid). Then, because the game only works if cards keep being inserted into the game and the only good way to do it is through the store.

Which other options do I have besides buying packs?

There are other ways to get good players, but none of them are perfect. You can sell the FUT Champions and Squad Battles rewards or save the coins you earned in games, and use them to buy the cards you want in the market, but it will take a long time until you collect all the coins you need. Another good option is to make trading, which may be very profitable but it is also very time-consuming. Finally, you can also buy coins directly to a coins store but there is a risk of ban since this is not allowed by EA Sports.

How difficult is to pull a good card from a FIFA 18 pack?

For those who still don’t believe that buying packs is not a good strategy, we will show them with mathematics.

FIFA 18 Ultimate Team has more than 15,000 players. Which player do you want? Probably one of the most expensive ones, like Ronaldo. Let’s see what the odds are of getting him in a pack. First we must know how many players cards have the pack you are opening. Let’s say that you are opening a pack with 4 players. It means that your chances of getting Ronaldo are something like 1 to 3,750, right? Wrong! There are players with more cards in FIFA 18 packs than others.

Cardweight is a metric used to estimate how often a particular card is traded on the FIFA 18 Ultimate Team transfer market. The higher the cardweight number, the higher likely this card is traded on the marketplace. It gives an indication of how rare cards are. The cardweight of Ronaldo is around 2, the lowest in the game. It means, for example, that he is 100 times less common than David Luiz which cardweight is around 200. We know that cardweight does not measure the chance of finding a specific card in a pack since cards that are likely to be kept or quick sold by the original owner will not have an accurate weight. However, through complex calculations we have found a way to find the odds of getting a specific player in a pack using his cardweight, the number of quick sells of that card and the number of cards stored in clubs.

In this case, as Ronaldo is one of the players that when someone buys they do not try to sell again, the chances of getting him in a pack are 10 times lower than the average of gold players which cardweight is 150. In other words, the chance of getting him are something like 1 to 150,000 for each card player you open in a pack.

What do you think about this? Do these odds create a good opportunity? Let’s see. Pick a number between 1 and 150,000 and keep it to yourself. Now, ask someone to try to guess which number you are thinking of. How many times did that person try to guess it? Thousands, for sure. If you want to know how much money you will have to spend, just multiply the price of each player card in a pack by the number of tries. Now is that a lot of Money ?!

You probably would be happy getting other good players besides Ronaldo. However, all the good cards are very rare. In the top 10 players with best overalls, none have a cardweight higher than 40. For your information, every time someone get a player card in a pack, the odds of getting one of these players are only 1 to 1,400. As you can see, it is very difficult to get good cards in FIFA 18 packs.

Final note: if you want fun, choose opening packs. If you want success, avoid them, unless you don’t care about spending real money. In that case, EA Sports will thank you.