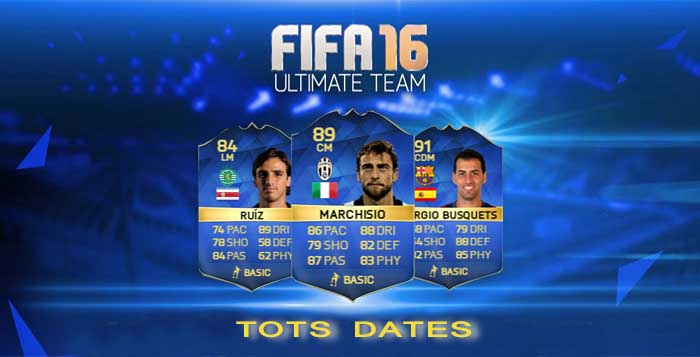 Since Team of the Year was released, in January, we have been repeatedly questioning about TOTS Dates for FIFA 16 Ultimate Team. In fact, they were not announced by EA but we have an idea when Team of the Season will go out.

Any Ultimate Team player knows how important the TOTY and TOTS teams are. During the release it is possible to make big improvements to our teams and make amazing deals in the transfer market. That’s why it is normal to see the FIFA community eager and waiting for the launch of the first Team of the Season. The usual way things go is that EA Sports doesn’t announce when it will happen. In the best of the chances, they do it one week before the release date, but it is very unlikely to happen. That is, if you really want to know when the TOTS Dates for FIFA 16 Ultimate Team, so keep reading and all will be revealed.

Year after year, EA follows a very strict calendar. Looking to the release dates of the previous years, it is possible to get a good idea about when the TOTS of FUT 16 will begin. In FIFA 12 and FIFA 13, the first TOTS was launched respectively at May 2 and May 8. However, in FIFA 14 the expected date (May 7) was anticipated two weeks. This was an exception obviously due to the World Cup. Last year, in FIFA 15, the first blue cards were released only at May 20. What sets the date of the first TOTS is the calendar of domestic leagues. This season, the end of major European leagues is in line with what happened in 2014. That’s why the first TOTS of FUT 16 should be announced at April 27, 2016 at 4pm (UK time) and released in packs two hours later. Since these teams are always announced at Wednesdays and Fridays, the alternative dates are April 29 or May 4.

This prediction is also based in our experience and in other important factors:

Like it happened in previous years, the Most Consistent but Never In Form TOTS will be the first one to be launched. In fact, this has been officially confirmed by EA Sports that began to consult the community about the most suitable players for these three teams (gold, silver and bronze) on March 22, more than a week earlier than in FIFA 15 and FIFA 14 (April 2).

Football League TOTS
From May 9th Monday to May 11th Wednesday

Benelux TOTS
From May 9th Monday to May 11th Wednesday

Bundesliga TOTS
From May 13th Friday to May 20th Friday

Liga NOS TOTS
From May 16th Monday to May 18th Wednesday

Liga BBVA TOTS
From May 20th Friday to May 27th Friday

Latin America TOTS
From May 23rd Monday to May 25th Wednesday

Russian League TOTS
From May 23rd Monday to May 25th Wednesday

Ligue 1 TOTS
From May 27th Friday to June 3rd Friday

Serie A TOTS
From May 27th Friday to June 3rd Friday

SuperLig TOTS
From May 30th Monday to June 1st Wednesday

Note:
Slight diferences may occur depending of time zones and platforms

Now that you already know when FUT 16 Team of the Season will be out, you can start the countdown.

If you want to know more about the Team of the Season of previous years, click here.