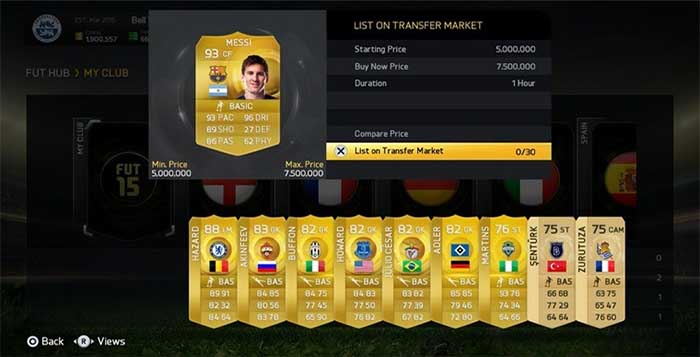 EA Sports published today an open letter to the FIFA community about the FUT 15 changes they have implemented in the last weeks and we added our personal notes.

FIFA Ultimate Team (FUT) should be fair and fun for every player. That’s why we have implemented a lot of changes to FUT in the past several weeks, including our decision to make the Transfer Market inaccessible via the Web and Companion App, and the introduction of Price Ranges within the Transfer Market.
They should have done it when the game was launched. Not now. This is not a beta. They knew this was going happen.

What are we trying to achieve with these changes? It’s simple – we want to keep the game fair and secure for everyone, and ensure a level playing field for all FUT fans. To accomplish this we have to root out the activities of coin farmers and cheaters who are harming your experience with the game. These exploiters generate coins illegitimately in the FUT economy through the use of bots and phishing scams, creating a flood of fraudulent in-game currency and driving up the cost of players on the Transfer Market. This inflation fundamentally damages the economy, making top players unattainable for the vast majority of FUT fans who are not exploiting the system and who simply want to play the right way.
It is true that coins sellers and Autobuyers have responsibility in the inflation. But EA is blaming them for everything. Inflation is also result of the too many happy hours they released and of too many FIFA Points they sold.

Since implementing these changes, we’re seeing positive signs of restoring balance to the FUT economy and mitigating some of the negative effects of exploitation within the game.
The most visible change has to do with the amount of gamers that have dropped Ultimate Team mode: almost 50%.

We’re also delivering on our responsibility to provide you with a safe place to play. We continue to invest in security tools, and promise to continue to find the right ways to fend off coin sellers and farmers who are hurting the game. We imposed a daily limit on matches, which has also had a positive effect in stopping coin farmers from generating illegitimate coins. But we have more work to do.
Why EA doesn’t say how big is this daily limit ? 75. They are trying to clean their image but they are still hiding things from the community ?!

The game is fun when everyone is playing by the same rules, and all of the changes we’ve been making are designed to bring harmful activities to a halt and bring fun and fairness back to FUT – playing matches, squad building, Transfer Market trading, and making decisions with pack items.
Let’s be honest. The focus of EA’s changes is to protect their business and we understand that. EA should stop treating the community as a group of children.

Since the introduction of Price Ranges, we’ve already made more than 650 adjustments to player pricing, with a focus on the highest value players available in the FUT economy. The introduction of Price Ranges has helped restrict illegitimate coin transfers on the FUT Transfer Market, and balance player item prices so they reflect the current marketplace, but finding that right balance will take some time – we have a team dedicated to finding that balance.
More than 650 ? Until yesterday they made 1025. That’s a lot more. They probably forgot to sum the adjustments of the last update.

Last Wednesday, we made another important change that will bring better trading balance and fairness to the Transfer Market. We’ve introduced unique Price Ranges on each platform (Xbox, PlayStation, and PC) to reflect the values and dynamics in those unique economies. This will bring minimum and maximum prices better in line with the perceived value within those economies, and make transfers fairer and more enjoyable for all FUT players.
Using the same price ranges for all platforms was EA’s first big mistake. It can works well when FIFA 16 starts, but now there is no chance. This kind of experiments isn’t good to the markets’ confidence.

We removed access to the Transfer Market from the Web and Companion Apps for maintenance on February 13, for reasons including the urgent need to cut off the fraudulent activity that’s been occurring on those Apps. These Apps became one of the main methods for coin sellers and farmers use to move coins quickly through the FUT economy. By closing Transfer Market access from the Apps our goal was to:

Slow down coin selling transactions in order to bring stability to FUT item prices.
Locate and ban coin seller accounts.
Increase the security and stability of the Apps.

You have been asking – when will Web and Companion Apps access to Transfer Market be restored? We want to do this as quickly as possible, and we are working as hard as we can to bring them back for everyone to use…but we can’t do that until we’ve made them secure and more stable.
Last year, EA promised a completely new Web App to avoid the long downtime that happened. How different were the things this year ? It’s good to know that they have plans to bring it back but how much we believe that they are really doing something about it ?

We also have more changes coming to make things better: better coin rewards for participating in featured FUT Tournaments, more great promotions and special content in FUT, and more security changes to cut off the exploits.