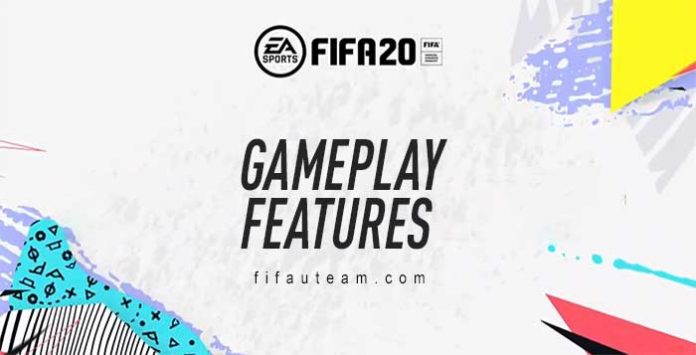 Do you know the FIFA 20 gameplay features? If you don’t, you are in the right place!

EA SPORTS™ FIFA 20 on PlayStation 4, Xbox One, and PC introduces Football Intelligence, a complete gameplay rethink that unlocks a deeper level of football realism. With the new Authentic Game Flow, user-controlled Decisive Moments, and enhanced Ball Physics System, you’ll be put at the centre of the key moments in each match you play in FIFA 20. AI Defending
An overhaul in the positioning and tackling system creates an environment for AI to better complement the user-controlled player. AI will offer intelligent defensive support, while rewarding and advantaging user defending.
Win it back with better defensive support from AI-controlled players via an overhauled positioning and tackling system.

Decisive Moments give you more control over the moments that determine the outcome of a match. From Composed Finishing in the final third to Controlled Tackling at the back, along with new Strafe Dribbling and a Set Piece Refresh, you’ll have increased input in the key stages of each game.

Strafe Dribbling
The new strafe dribble mechanic adds more dimension to attacking options; enabling you to move with more agility than ever to lure your opponent in before beating him with speed or skill.
Move with more agility. Lure the defender in. Beat them with speed or skill. New strafe dribbling adds new dimensions for attacking play in FIFA 20.

Controlled Tackling
Using the Active Touch System, user-controlled defending is advantaged and rewarded through a variety of new tackle animations. The cleaner the tackle, the higher the likelihood of retaining possession of the ball.
Take back possession with Active Touch Tackling and new animations that reward you for well-timed defensive play.

Set Piece Refresh
A system refresh gives deeper options for aiming direct free kicks and penalties and introduces more skill-based mechanics for ball-striking that are more rewarding than ever.

Composed Finishing
An overhaul in the fundamentals of shooting will give you more consistent and clinical finishing, creating a more true-to-life shooting experience that better rewards authentic finishing and offers risk and reward in more difficult situations like volleyed crosses.
More clinical finishing when one-on-one. More risk with volleys and long shots. Overhauled shooting creates more realism in front of goal in FIFA 20.

Timed Finishing
Timed Finishing was introduced in FIFA 19 to create more depth in the shooting mechanics while increasing the skill gap to differentiate the good players from the best players, and this philosophy remains unchanged. EA’s data shows that players who spent time practising the Timed Finishing mechanic are getting significantly better shooting results than players who did not invest the time to master it, and this is already a step in the right direction in terms of skill. It also tells that even the best players are unable to execute green timed shots on every timed shot attempt. Composure in football is very important when shooting, and Timed Finishing in FIFA represents that concept. Instead of just relying on muscle memory, EA is encouraging you to analyze the game (in a split second), decide whether to use this mechanic or not, and then compose yourself to execute it properly. Whilst evaluating the feedback given around Timed Finishing, EA discovered certain imbalances in the shooting system that were completely independent of Timed Finishing. To explain a bit further, some difficult shot contexts were producing unrealistic results by being more effective than they should have been, and green timing these shots was simply amplifying the underlying problem.

Timed Finishing puts extra control in your hands, and it gives you as a user the ability to increase the speed, add curve, and slightly reduce the error percentage when performing a shot. The goal for Timed Finishing is not to overcome poor shooting decisions or difficult shooting contexts. In fact, the situation in which you shoot should matter more than ever when deciding whether you time your shot or not. And if you decide to time it, and get it green, you will be rewarded but not to an unrealistic extent. Shots in difficult contexts, for example a first time 135 degree shot, moving backwards from outside the box should have low chances to be scored even if you time it green. Another aspect is that aim/power still matters, so overpowering a shot can’t be compensated by green timing it. In addition to fundamental changes to the shooting system that we EA is doing this year, they’re also making some changes to the timed finishing mechanic itself to ensure a more balanced shooting experience and that the mechanic continues to be just a modifier/influencer to the outcome of your shot.

A few other notes:
– Timed Finishing puts an extra layer of control in your hands and early community feedback has confirmed that it makes shooting more satisfying when timing green.
– Taking away (or removing) shooting control from the player would be a step backward on game depth.
– The green timed window will be slightly harder to hit, and when hitting it, the error reduction will be slightly smaller – which means the risk will be higher.
– The option to turn the feature off will still be there.

Manual Goalkeeper Movement
In order to provide a more authentic experience, EA has modified the Manual GK Movement to simulate the ‘Anticipation’ type of movement seen in real-world goalkeepers. Often goalkeepers try to anticipate shots and are re-adjusting their position based on their understanding/prediction of where the shot will go. In FIFA 20, the Manual GK Movement will be much slower, only allowing you to move one or two steps in the requested direction, instead of full reach across the goal. The improved Manual GK Movement should emphasize the risk/reward aspect of the mechanic, anticipate it wrong and you will have more chances to concede a goal. In addition to these changes, EA is also making sure that the Goalkeeper manual controlling will be aligned with that of the shooter controls – meaning that, if controlling the GK, your manual inputs will lock once the shooter’s shot direction has locked.

Chained Skill-Moves
EA is working through the details of this mechanic right now – like what skill moves will be affected and how attributes will impact the mechanic, etc. Ultimately, EA wants to provide an authentic experience for both the attacker and the defender without taking away any options from the player’s hands. Chained skill-moves are not authentic in football and EA is working to bring this mechanic closer to real life.