We have created this FAQ to make it easier to understand how Seasons Objectives work.
BASICS
WHAT ARE FUT 21 SEASONS OBJECTIVES?
Seasons Objectives are part of the wider Objectives system in FUT 21, which allow you to progress towards rewards for your Ultimate Team. 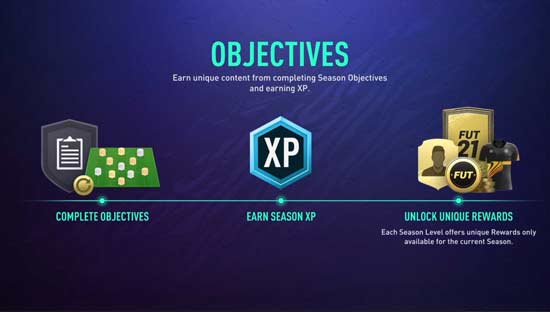 HOW DO I ENTER IN SEASONS OBJECTIVES?
When you log in to Ultimate Team, you’ll find the Objectives Hub accessible from the bottom main bar navigation. 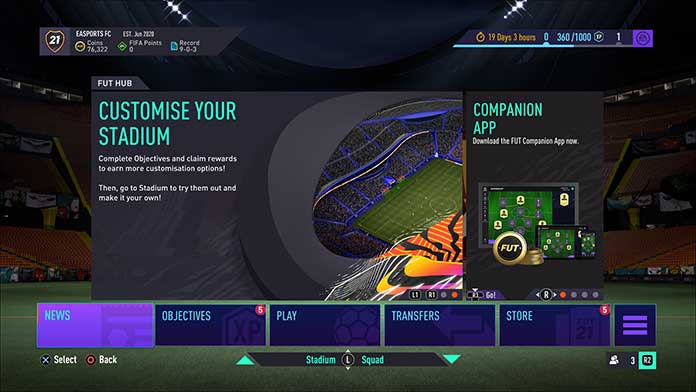 WHAT CAN I DO ON THE OBJECTIVES HUB?
Inside this hub, you are able to track your progress towards Seasons Rewards, jump to the next season objective that you choose to complete, as well as see your progression against Milestones and Foundation objectives.
WHAT THOSE NUMBER ON THE TOP RIGHT CORNER MEAN?
While on FUT 21 Seasons Objectives, you can see in the top right corner of your screen the current season, the amount of FUT XP you have, the current level, how many XP points you need to reach the next level and the remaining time to refresh objectives.
HOW CAN I KNOW IN WHICH SEASON I'M IN?
Completing certain FUT Season Objectives will give you FUT Season XP. As you gain more XP, your Reward Level for the current Season will increase. When you are on the FUT HUB, you can see your current Season information on the Season Widget in the top right corner of the screen. 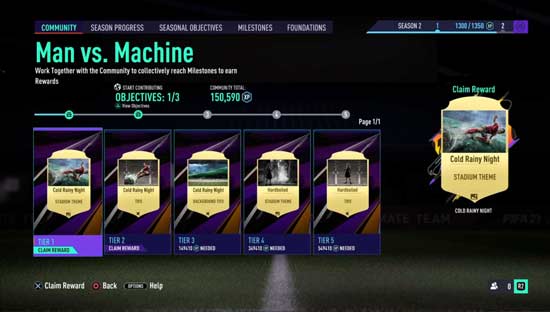 OBJECTIVES
HOW ARE GROUPED THE OBJECTIVES?
Objectives can be grouped together by themes and tasks. 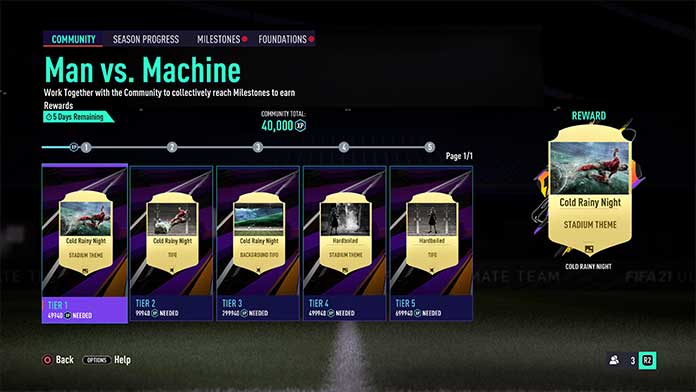 WHAT'S THE DIFFERENCE BETWEEN THE SEVERAL OBJECTIVES?
Season Objectives are released in 4 ways: Daily, Weekly, Season, and Dynamic Objectives.

Daily Objectives
Simple tasks which are released each day and contribute XP to your Season Rewards. They will automatically release each day and expire after 24hrs.

Weekly Objectives
Groups of objectives which have rewards and XP associated with the completion of the individual objectives release each week. In case you miss one week’s objectives they will stay active in the game for a 2nd week, with the exception of the last week of a season which will expire when the Season does.

Season Objectives
Longer-term challenges to finish and from the time they are put live they will remain live until the last day of the season.

Dynamic Objectives
Special time-limited release Objective Groups which will not have a regular release schedule and will end after a set period of time determined by the dynamic objective group. These could be tied to campaigns or real-world events that are happening in the game during the course of the Season. This is also where you will find out FUT Events. 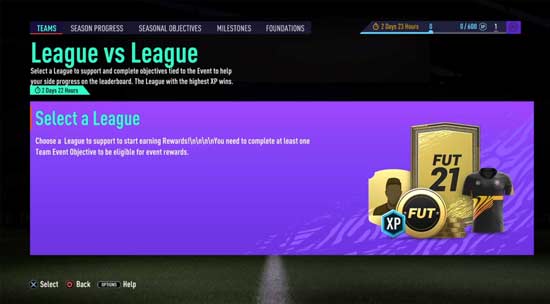 WHAT ARE FOUNDATION OBJECTIVES?
Foundation Objectives are the place for new players to learn the ropes of FIFA Ultimate Team, with organized learning objectives grouped together by subjects such as trading, team building and Chemistry. They are the replacements for the Manager Tasks and Starter Objectives. 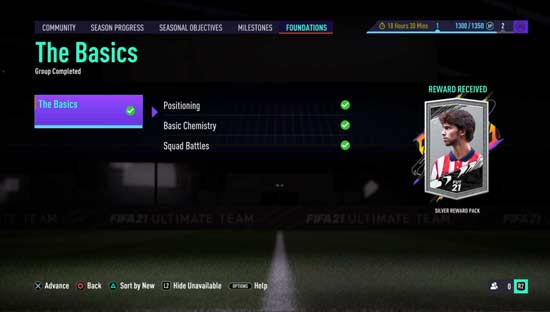 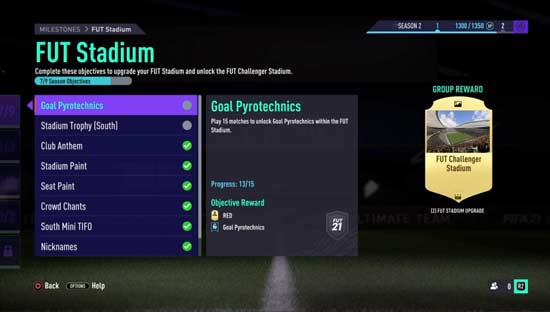 WHAT ARE FUT EVENTS?
In FUT Events you can collaborate and compete by completing Objectives in-game to unlock rewards as a community. There are two types of events:

Community Events
With Community Events, each player who completes Objectives in specified groups will contribute to a global XP pool. As this pool of XP grows, the community will progress towards thresholds that unlock rewards for everyone who’s completed at least one objective in the event. 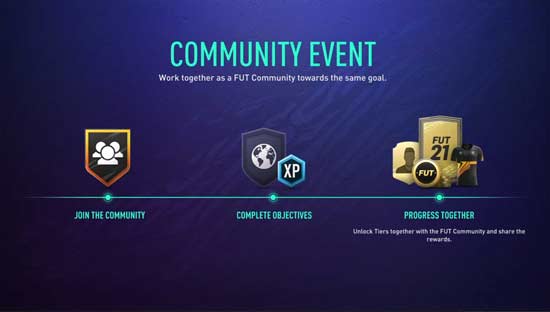 Team Events
Team Events will divide the community into different teams to compete head to head for rewards. Joining a Team is easy, when you start the Event you’ll be given the choice to support one of up to five Teams each with their own set of Objectives and rewards. Competitions are balanced based on which Team’s members are contributing the highest XP on average for the event. So once you’ve chosen your Team, start completing the Objectives to help your chosen side in the leaderboards. At the end of the competition the winning Team will be rewarded with new customization Items to show off your allegiance, Coins or Packs. The team that doesn’t win will still earn a consolation reward. The types of rewards available will change with each Event throughout the year. 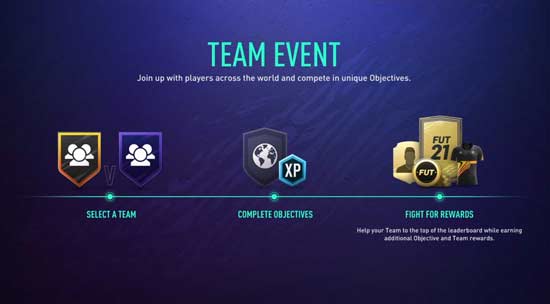 WHY AM I NOT ALLOWED TO COMPLETE A SPECIFIC GROUP OR OBJECTIVE?
There are groups of objectives that cannot be unlocked before completing other groups.
For example: in order to unlock the ‘Week 1 – Advanced’ group, you must to complete the ‘Week 1 – Basic’ group first. 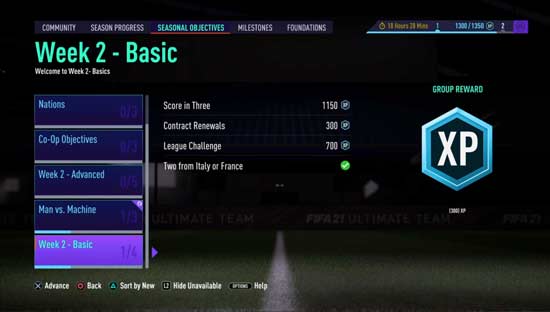 HOW CAN I KNOW HOW CLOSE I AM TO COMPLETE A SPECIFIC OBJECTIVE?
You are able to track your overall progress and see all level rewards in the Season Rewards screen for the duration of the season.
REWARDS
WHAT ARE THE REWARDS?
There are a diverse mix of rewards available in the objectives feature ranging from packs, players, club customization content or other items to help progress your club such as match coin boosts. 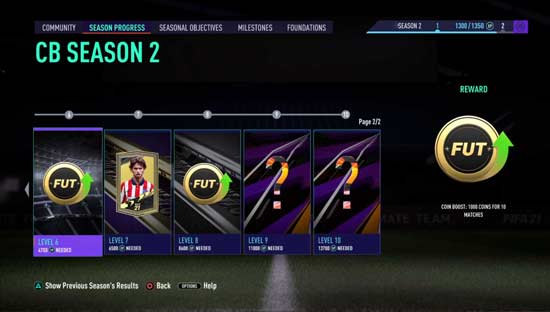 HOW TO ACHIEVE REWARDS?
Completing groups of Objectives will be key to you unlocking larger rewards to help you grow, customize or advance your Ultimate Team.

Individual Objectives you complete will earn you XP and Rewards, as well as help progress towards completing the Objective group it is in.

HOW CAN I GET BETTER REWARDS?
Completing Objectives and earning XP will progress your Level on the Season Rewards tab. Each level has its own Season Reward or Reward choice.

As you level up throughout the Season, the bigger both the challenges and rewards will become. DO I HAVE TO CHOOSE MY OWN REWARDS?
Each time you earn enough XP to get to a new Season level, you’ll be able to get a new reward on the Season Rewards screen.

For some of the Levels, you’ll get the choice of which reward you want. Once you make a choice, you can’t get the other reward options. So choose wisely!

At the end of each FUT Season, your Reward Level and XP total will reset.
WHY THERE ARE BRONZE, SILVER AND GOLD OBJECTIVES?
To balance Season progression to appeal to all types of FUT players, from those who play once or twice a week, to players regularly competing in FUT Champions or Division Rivals. The most difficult objectives (gold) have the best rewards.
CALENDAR
WHEN ARE DAILY OBJECTIVES REFRESHED?
A fresh batch of daily objectives is out every single day, at 6pm (UK time).
WHEN ARE WEEKLY OBJECTIVES REFRESHED?
A fresh batch of weekly objectives is out every Friday, at 6pm (UK time).

WHEN ARE SEASON OBJECTIVES REFRESHED?
Each season will start as soon as the previous one expires.
It is expected to FIFA 21 seasons have a duration of around six to eight weeks.
WHEN ARE DYNAMIC OBJECTIVES REFRESHED?
These groups do not have a regular release schedule and end after a set period of time determined by the dynamic objective group. These could be tied to campaigns or real-world events that are happening in the game during the course of the Season.

WHEN WILL THE FIRST SEASON TAKE PLACE?
The first season starts as soon as the game is out. 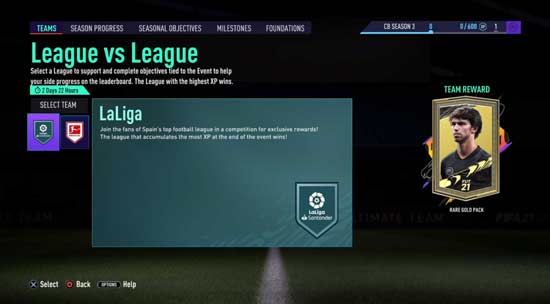