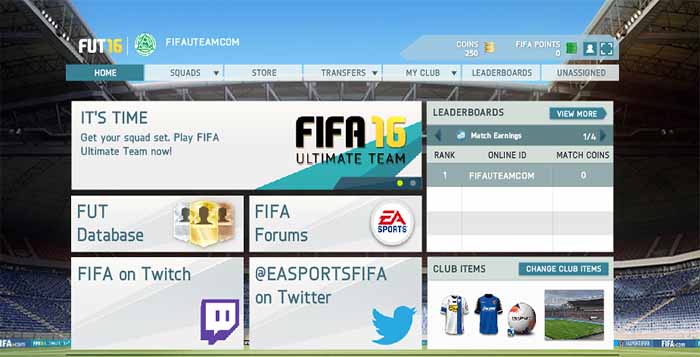 There are many people asking us for help about FUT 16 Web App. But there are many more who still have problems. As always, we are here to try to help you and we have compiled some suggestions to the FUT 16 Web App Most Common Problems.

I am registered in Origin but I can’t get into the FUT 16 Web App.

The FUT 16 Web App early access is only for who have created a security question/answer before August 1st 2015. If you are a new player, you will need to play in the console first before you can access to the Apps.

Follow these simple steps:
1) Type “https://www.easports.com/fifa/ultimate-team/web-app” in the address bar of your internet browser.
2) Choose the main console where you will play.

3) Enter the answer to the security question.

4) Confirm the club name and its abbreviation.

Clean the cache of your browser and try other browsers (best results are being reported to us with Firefox). If it doesn’t work, that’s because the servers are overloaded and you will have to wait.

I can access to the FUT 16 Web App but the market is unavailable.

If you haven’t played FUT 15 in the console where you plan to play FUT 16, the Apps will not make available the market’s earlier access. You need to validate your FIFA 16 account in the new console to unlock the market.

Use CTRL- to zoom out until you see the whole window.

The App to mobile devices is the Companion App and it will be available only after you access the FUT 16 Web App.

I can’t buy FIFA Points in the Web App

FIFA Points are only available before the game release in the early access of EA Access subscribers.

Where is my daily gift ?

Daily Gifts are available in the FUT 16 Web App starting on September 15th. It is limited to one per day. In the days you don’t open the Web App, you will loose the daily gift of that day. Pick yours up each day at 12am UK.

I no longer can access the FUT 16 Web App.

If you had access to the FUT 16 Web App but no longer have, even if you haven’t made any change, you should know that EA Sports is blocking App access to all players that haven’t played FIFA 16 in the console until midnight of October 1st (UK time). To keep using this App, you will need to buy the game.