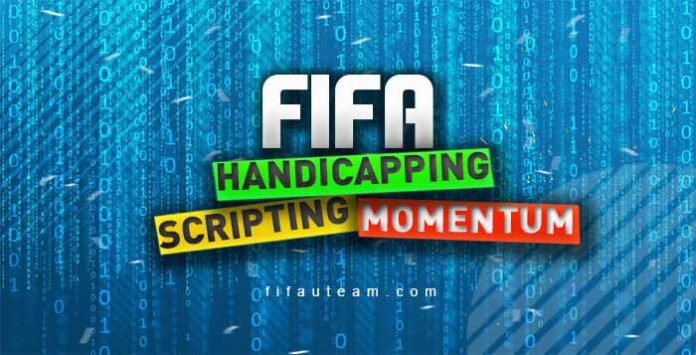 We are extremely proud to announce that we’ve teamed up with crlarsen, owner of futfacts.com, a FIFA Ultimate Team website dedicated to people who prefer knowing over believing. There are no many people writing as well about FIFA as he does. This is a great addition to our team, that will help us to improve the quality texts of our website. Enjoy this amazing article where he explains why FIFA scripting, handicapping and momentum don’t exist. No other topic has stirred as much controversy in the FIFA community as scripting aka handicapping aka momentum. Despite the lack of evidence supporting it, the assertion that EA deliberately manipulates matches for whatever reason has become widely accepted as fact.

It’s not a secret that I have been a skeptic from the start, and despite my ongoing attempts to challenge my own views, my further investigations haven’t made me change my mind. In the following sections, I would like to elaborate on what makes me so certain that scripting, handicapping and momentum are myths.

There are Better Explanations

Let’s be very clear about something: I do not deny that FIFA contains loads of annoyances. Whether it’s 90th minute equalizers, losing- and even relegation streaks, inconvenient graphics glitches and the likes, I have seen them all. So, don’t waste your time posting video evidence confirming these things as fact.

But the mere fact that these things happen doesn’t lead to the conclusion that they happen because EA is manipulating matches deliberately. This ought to be common sense.

Before we even start thinking about foul play as a possible cause, we effectively need to rule out other possibilities. And the fact is that we can’t. On contrary, all the phenomena I just mentioned have perfectly viable, natural explanations. So, why even consider foul play?

A recurring element in many FIFA scripting posts around the internet is a somewhat optimistic assessment of one’s own skills combined with a lack of recognition of the opponent’s abilities.

As an example, take a look at this survey where people were asked to assess their own skill level relative to others taking the same survey. 70 % thought they were above average. This illustrates that people just aren’t realistic about their own capabilities relative to their opponents.

Having said that, it’s an undeniable fact that you sometimes lose despite being the better player. But here is the thing about football: This game isn’t about being better overall, having more possession or more shots. It’s about being better in those few situations that decide the match. You may beat a guy 9 times out of 10 and still lose the 10th match due to a brief lack of concentration. Tough luck, but that’s football and I see no reason to assume that this would be different in a football simulation like FIFA.

The lack of recognition of the opponent’s abilities is equally prevalent in matches where the opponent is the better player. When you follow the FIFA scripting debate, you will come across those posts where people complain about their players feeling clumsy, slow and sluggish when passing and shooting. Purportedly, the only, possible explanation to these feelings is – scripting, because as we all know, the opponent can’t make your players pas poorly etc.

Or so they say, because let’s be very clear here: The mere fact that your players feel sluggish or slow does not necessarily imply that they were slower or more sluggish than they used to.

The opponent obviously can’t make your players slower, clumsier or more sluggish per se, but he can make them feel as if they were.

Take as an example passing: It’s an inherent part of my game plan to attack the opponent’s ability to pass in the midfield. I believe that many other skilled players have worked that out as well. So, what I am telling you here is that yes, the opponent can definitely affect your ability to make successful passes. And if he is sufficiently better than you, it will feel exactly as if your players suddenly have forgotten how to pass.

So, when someone claims that his players felt worse, it indicates that they perhaps just haven’t realized how much damage a skilled opponent can do to your own game plan.

EA Doesn’t Have a Motive

The fact that there are better explanations around is not the only reason to reject the entire notion of FIFA scripting.

Another good reason is that there isn’t a credible motive. Companies do not just waste money bothering their paying customers for fun. A company like EA would never ever invest money into developing a concept like scripting unless there was a very certain business case at the end of the rainbow.

FIFA scripting believers have speculated about possible links between manipulation and EA making more money. The perhaps most popular belief is that EA manipulates matches in order to level the playing field and thereby make the game more attractive to bad players.

While it’s unquestionable that EA wants to create a multiplayer gaming experience where both players stand a chance of winning and losing, it’s unlikely that they would want to manipulate matches in order to achieve that goal.

First and foremost, think about all the people this would bother. Cheating your players like this is literally one of the most effective efforts to kill your own business, and game designers have known this for ages.

Third, despite EA’s aspirations, FUT matches aren’t particularly even. It’s a hard fact that ties and narrow wins are rare in FUT compared to real football. As a matter of fact, it can be established with certainty that FUT doesn’t have an unnatural surplus of 1-goal wins or draws given it’s overall goal ratio. In other words, we can rule out that matches are made more even than they normally would be.

With that, we can cross the “make matches even” motive from the list of possible motives. And the question is what other viable motives there are. I personally can’t think of any.

Why Keep it a Secret if it was True?

BF1 uses a concept sometimes known as adaptive difficulty in online multiplayer game modes. If either side is losing, they will be reinforced with a so-called behemoth to balance things out.

What’s notable about behemoths is that they are introduced completely openly and hence also with the consent of the involved players. Although people discuss when and how behemoths should be introduced, no one disputes the fairness of the concept as such.

Perhaps surprising, FIFA does make use of adaptive difficulty in certain offline modes. And, just like in BF1, it’s communicated openly:

This raises a question: If adaptive difficulty is present in FUT, then how come that EA are denying it? I simply don’t see a motive to keep this a secret in FUT but not in BF1 or for that matter in offline FIFA.

Even the Believers are Divided

A popular argument among FIFA scripting believers is that the majority believes in scripting, and therefore it must be true. This argument is logically flawed and it rests on a false premise.

The majority does not share the same view with regards to scripting. When you follow the debate closely, you will notice that FIFA scripting isn’t one, uniform belief but rather a broad range of ideas with little else in common than the belief in foul play. In fact, surveys have confirmed that scripting believers have very different and often contradictive ideas about what is going on. The fact that we refer to “it” with different terms like scripting, momentum and handicapping is a direct consequence of the division among the believers.

Apart from the fact that the majority doesn’t degree at any deeper level of substance, I find it necessary to state that there are many examples of beliefs, which not only are popular but also completely wrong.

Let’s be scientific here for a moment. No evidence suggests that FIFA scripting exists, and there is no credible motive for EA to put it in or to keep it a secret if they did put it in. At the same time, all the phenomena usually associated with scripting have other explanations.

So, why the heck do people believe in this? It makes no sense.