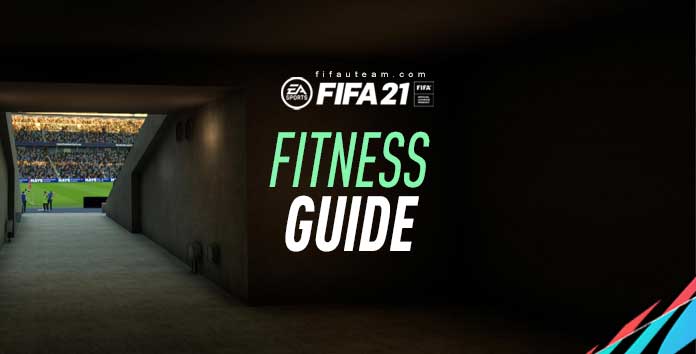 Fitness was used to be one of the most important aspects of this game. However, EA made deep changes to the way it works. We’re here to explain what’s new and to help you out with this FIFA 21 fitness guide.

The basics of FIFA 21 Fitness

Fitness is an English word that means “being in good shape”. It is directly related to one’s agility, speed, body balance and motor coordination.

In FIFA 21 Ultimate Team, just like its predecessors, the fitness is numerically measured on a scale of 1 to 99. The higher, the better. 99 corresponds to a player’s ideal physical condition. It’s the highest fitness possible. 1 corresponds to a critical state you’re not going to want to be familiar with.

During a match, each player has two fitness bars: the instant bar, represented by a blue bar that goes red in extreme situations; and the accumulated, represented by a white bar overlaid by the blue bar. The first decreases during the sprints, ball disputes or other efforts, and then it regenerates. The second will gradually reduce over a game and serves as a ceiling for the instant fitness bar.

A careful analysis to the following image helps to clarify any questions. The game runs from 1 to 5 and, as you can see, the biggest of the bars is getting smaller. In 1, the bar is almost complete. Unlike what happens in 3, in 2 the player is running and therefore is momentarily more tired, ie, less able to continue to make efforts. However, the white bar is bigger which means that with a little rest he will be in better condition than in 3. In 4 he is very close to having to leave the game because he can not make efforts for a long time anymore. He gets tired easily. Finally, in 5 the player reached the limit situation. He has to leave or he will get injured.

We have seen many people saying that Fitness doesn’t exist anymore. That’s not true. The only (big) difference is that all players start matches with the maximum chemistry possible. In other words, you no longer need to use fitness squads, apply fitness items or give a rest to your players. They will be always ready to play. As a result of this change, fitness items and fitness coaches were removed from FUT.

Fitness is still in FIFA 21 and it affects the performance of your players. A player with very low fitness will have poor performance. His movements will be slower and obviously, he won’t be able to keep up with the teammates and opponents. Besides, he’s more likely to get injured.

How Fitness is Affected

How FIFA 21 fitness goes down

In general, it’s safe to say that the fitness level will be higher or lower according to the following factors:

Playing Time
A player’s spent fitness is directly proportional to how long he’s on the pitch. Generally speaking, if he plays just for one half, he’ll have spent half the fitness he would’ve spent playing 90 minutes.

Stamina
Stamina is different from player to player. It says to you how fast a player’s fitness deplete. It is easy to understand that players with high stamina lose less fitness during the game than the ones with low stamina. For that reason, they finish the game less tired, ie, with a higher fitness level. If you want to see your players running at the end of the matches as they do in the beginning, you should check that they have a good ‘stamina’ IG stat.

Effort Made
Players get tired as they make effort. This effort rate is measured in FUT 21 by the number of meters traversed and the intensity and frequency of the body’s work. Players such as goalkeepers tend to move less around the pitch and usually don’t challenge the ball, therefore spend less of their fitness. This way they’re able to keep on playing for much longer than the average player without having their fitness drastically decreased. Anyway, the effort made by a player depends exclusively on who’s controlling. In that case, yourself.

Injuries
There are two types of injuries: the ones that make players get substituted during the match and those that just lower their fitness. In the second case, it’s up to you. You can keep him on the pitch or not, knowing that he’s not going to be playing at his best. Even if he stays still on the pitch, the moment he gets into a challenge he’ll have his fitness harshly lowered, especially if that’s against a strong defender. You may want to avoid the most aggressive ones. Normally what causes this kind of injury is sliding tackles from behind. When you abuse a player’s fitness making him travel the same exhausting path every time, you’ll be providing him what’s necessary for a muscular injury to happen.

Work Rates
A player’s work rate, which can’t be altered in FIFA Ultimate Team, affects decisively the number of fitness points he’s going to lose. It defines the predisposition a player has concerning the different field zones he’s going to occupy. That is how he’s going to behave when you’re not controlling him. It’s independent of the effort made because that one is up to you. Even if you wanted to spare a single-player some work, you can’t do anything because the work rate is what determines if he will run or not while he’s not being controlled by you… and you can’t control only one during a match, right?! Players with high work rates, defenders or attackers, are the ones more likely to get tired faster.