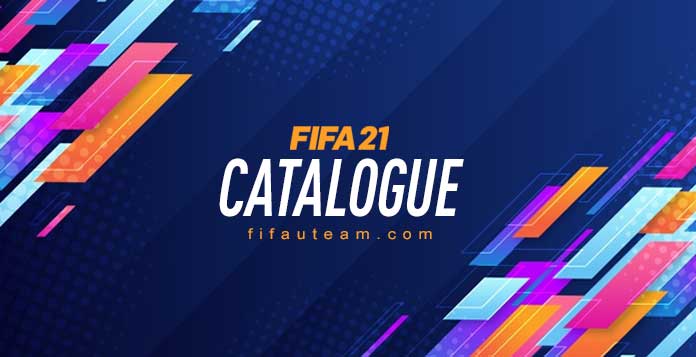 The EASFC Catalogue used to houses dozens of different in-game unlockable items. However, EA has decided to not include it in FIFA 21.

What was the EAS FC Catalogue

The EA SPORTS Football Catalogue is a feature available in some older FIFA titles and it is no longer available as of FIFA 21. It was initially created for FIFA 13, to reward you by your FIFA time play. Until there, your progression could be tracked by your level XP but it was useless. With the addition of EAS FC Catalogue, you had more reasons to play the game because your efforts are rewarded with unlockable items. In FIFA 14 the biggest addition to the EAS FC Catalogue was the feature that allows you to send gifts to friends. But things did not go well. EA Sports have disabled the most popular and most wanted item of the EAS FC Catalogue, the FUT Coin Reward Boosts, because thousands of players have exploited a glitch that allows them to earn much more coins than it was supposed to give. The item was unavailable for five months, between October 2013 and February 2014. In FIFA 15 the coin boost was back again but without the feature to send gifts. The biggest addition was probably the loan players item that gives you the chance to try top players in your Ultimate Team squad. In FIFA 17, EA removed the EAS FC features, including alerts and messages to your friends, excepting the catalogue which is still available. In FIFA 20, Ultimate Team items were taken off from the catalogue and finally, in FIFA 21, the catalogue was completely removed.

How the FIFA Catalogue Works

How to use the FIFA Catalogue?

The EASFC Catalogue still exists for previous editions, so it makes sense to explain how it works.

The EAS FC Catalogue is a kind of store where you can trade the FCC (Football Club Credits) earned for dozens of items. It tracks progress through the game by awarding you with XP and Football Club Credits, which allow you to redeem in-game unlockable items to enhance your FIFA experience. Your EA Sports Football Club Level determines which ones are available for you to redeem. As a Level 5 gamer, you only have access to items categorised from Level 1 to 5. So, the more you play and level up, the more it gives you access to new unlockable items. Items include things like kits, boots, balls and extra matches in Seasons.

As we have said, you need two things to redeem items from the EAS FC Catalogue: EAS FC Level and FC Credits.

EAS FC Level
No matter what game mode you’re in, there are numerous things you can do to be automatically awarded XP (Experience Points). Once you complete one of these events you’ll be notified that you’ve earned XP via an in-game pop-up. Your XP total will be seen in the EA Sports Football Club widget in the corner of most screens. Each time you reach a certain XP threshold, showcased in a meter that fills up, you’ll reach a new level.

FC Credits
FCC is the abbreviation of Football Club Credits, the EA Sports Football Club currency. Don’t confuse with Ultimate Team coins. In the exact same way you earn XP, you’ll earn FCC. Your FCC total can be seen in the EAS FC widget in the corner of most screens. You can use your FCC to redeem unlockable items that can enhance your FIFA experience in the Catalogue.

There are many ways to win XP and FFC, including starting a new career or scouting, listing and buying players in Career Mode, playing FIFA Mobile, completing achievements and just by entering FIFA several times a day.

The catalogue wasn’t included in FIFA21 but you can still increase your EASFC level, earn Football Club Credits (FCC), and redeem items in previous FIFA versions that have this feature.

You can access the EAS FC catalogue wherever you are. You don’t have to back out of the mode you’re in because it is always available through the EA Sports Football Club widget. To access the catalogue, click on ‘Catalogue’ in ‘Customise’ menu (again, not available for FIFA 21). The EAS FC catalogue is optimised to show you first the items of the game mode you are in. Inside the Catalogue, the items are organised by level of experience and by game mode. It is possible, for example, to filter the items that are exclusively for Career mode. You can not redeem items of a higher level of yours and you are not allowed to buy an item more than once. The purchased items are marked with a green tick while the inactive items are marked in grey until you reach the respective level.

The EAS FC catalogue is only available in the console. You can not access it through the Web App or mobile devices. You will not find it in FIFA for Android or for iOS, but your progress in the game will contribute to your level XP and FC credits. You can use them to redeem items on your console.

To offer an item can be very advantageous because it only costs half the price you pay when you redeem that item for yourself. Ask a friend to offer you the items you want and do the same to him. Both will save.

It is very simple to send a gift. You just need to go to the FIFA catalogue, find it and select the option ‘send a gift’ which is right beside the ‘redeem’ option. It will pop a list of your friends and you just need to choose who you want to send the gift to finish the process. You can only offer items to friends that play on the same console you do.

Where to Find the Catalogue Items in FIFA 21

The items previously available in the catalogue

Most of the items that were traditionally redeemable from the Catalogue have been redistributed to other areas of the game in FIFA 21 in order to make them more easily accessible:

Boots and balls
Available by default when released through Title Updates and activated by Server Release updates.

Online Seasons Win/Draw/Extra Match
Available in the Online Seasons Menu, and can be redeemed once per Season with no total limit.

Financial Takeover
It’s a setup option when creating a new Career Mode save.

Scout Future Star
The item is no longer available but each Manager Career Mode save will feature a populated Youth Academy from the start.

Other previously available Catalogue items, including the Manager/Player Career Focused Training, Co-Op Seasons Win/Draw/Extra Match, and International Manager Offer are not in FIFA 21.

Q: Which items can I buy?
A: You can buy all the items for which you have enough credits and which are not marked in gray. The items of a higher level than yours are not available for you until you reach these levels.

Q: Is there a limited number of times you can buy an item?
A: Yes. You can only buy each item once, except to offer to your friends.

Q: How can I send a gift to a friend?
A: Simply select the item in the Catalogue, choose to redeem it, and you’ll be given an option to gift it to a friend. It only costs 50% of the regular price to send a gift and you can gift an item to a friend that hasn’t reached the level that the item is from.

Q: Where are the Ultimate Team items?
A: You can find most of them on Seasons rewards.

Q: I redeem an item but nothing happens. What should I do?
A: Contact the EA Support.