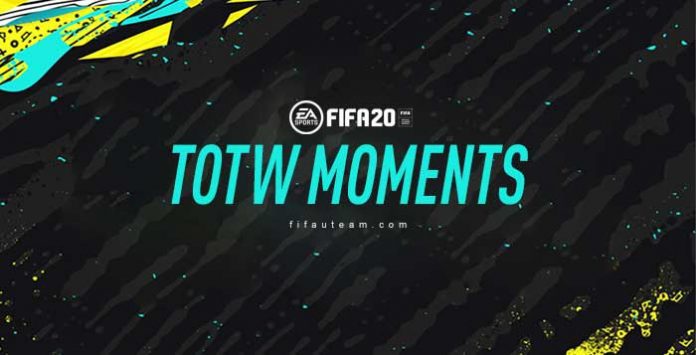 For the first time ever, Team of the Week Moments Items are being added to FUT. Discover what they are and why they will feature in FIFA 20.

FIFA 20 Team of the Week Moments

Following the suspensions of the Premier League, Bundesliga, Ligue 1, La Liga, Serie A and several other leagues across the world, EA have taken the decision to suspend their normal Team of the Week (TOTW) program. When thinking about a replacement for TOTW, they wanted to build something that is authentic to football and that is compatible with TOTW if they are able to reintroduce it later in the year. That’s why they are introducing the Team of the Week Moments.

TOTW Moments will be a recurring program that will be based entirely on a historical TOTW release from past FUT titles. Each squad will be a reflection of a specific TOTW that was released from March onwards in each product year. EA wanted to keep these Items distinct, to help distinguish between authentic performances taking place this season and in previous seasons.

TOTW Moments will replace TOTW in multiple places across FUT starting on Wednesday, March 18th. This includes, amongst others:

To ensure that Live Items continue to be valuable to players when building their squads, EA’ll also be upgrading Ones to Watch and Headliners Live Items based on if they are released in a TOTW Moments squad. As players with dynamic Items are selected for TOTW Moments squads, they will receive upgrades accordingly. When the regular football calendar resumes, Ones to Watch and Headliners Items will continue to receive upgrades as they would have done previously.

Q: When will the changes to TOTW occur?
A: Starting Wednesday, March 18th, 2020, and until the regular football seasons resume, TOTW will be replaced with a Weekly Squad of TOTW Moments players.

Q: Can I use TOTW Moments in Squad Building Challenges?
A: Yes. TOTW Moments will replace TOTW content and operate in the same way. Future SBCs and Objectives may require either TOTW or TOTW Moments items. We are also currently working to update the requirements of relevant active SBCs to reflect this change.

Q: How will the TOTW Moments impact my dynamic Items?
A: Ones to Watch and Headliners players will continue to receive upgrades if they are selected as part of the TOTW Moments squad for that week.

Q: What will happen to new TOTW packs I get as FUT Champions rewards and/or from SBCS?
A: From Thursday 19th March 9am GMT onward, and until the football seasons resume, the TOTW packs earned from FUT Champions will be replaced with TOTW Moments packs. Similar to the usual TOTW packs, when opened, these packs will contain the current active TOTW Moments players.

Q: What will happen to my existing TOTW packs?
A: Existing Team of the Week Packs (TOTW Upgrade, Ultimate TOTW Pack, Premium TOTW Pack) will continue to include Player Items from TOTW 26. If we are able to reintroduce TOTW later in the year, these packs would then update to use the active TOTW as per usual.

Team of the Week Moments Releases