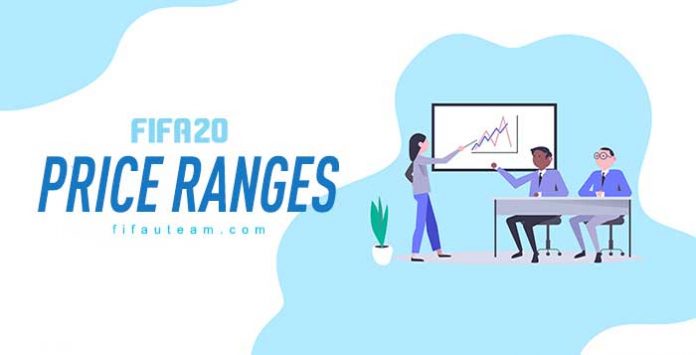 The FIFA 20 price ranges in Ultimate Team are responsible for controlling the transfer market, making it also harder for people to illegally buy and sell coins in the game. Learn about this feature and how you can benefit from it.

The Origin of Price Ranges

Why were price ranges introduced?

Price ranges are one of the game’s features that determine how much you can buy or sell cards on the transfer market. This feature wasn’t born with FIFA 20, but not everyone comprehends its purpose or what it was created for. We’ll try and clarify that.

It was March of 2015 and, although the profits kept growing with Ultimate Team’s micro transactions, EA believed that their income had still not reached its full potential. The main responsibility for causing this situation was apparently of four men who were able to create something called FIFA Server Tool Application by gaining access to the game’s source code. This program used cloud computing and a simulator in order to make it look like they were playing a large number of matches. By using multiple accounts, they’d address all the earnings to one main account, being able to accumulate approximately 70 million coins in just one hour. The mass negotiation of such coins obtained illegally was decisive for the rising of many coin selling websites, which would then make serious money with the final distribution.

Therefore, EA had to act fast if they wanted to stop all this business from happening. First EA removed the option to offer cards directly to your friends. But they realised they still needed to create something to make it even more difficult for the coin sellers to do their job. The company has always claimed that price ranges were implemented in order to guarantee fairness among the players (although that’s not a complete lie, there’s always been inequality in the game due to FIFA Points giving certain players an advantage!), but truly it was for economic reasons.

When price ranges were finally implemented the community was not happy at all, because, besides the fact that no one had access to a functioning web app, people were running out of trading techniques with the newly reformulated transfer market. From one moment to another it became harder to make coins and many problems started to emerge: some players would disappear from the market, EA wasn’t updating the price ranges regularly etc. Time cures almost everything, so when FIFA 16 came out new players started to accept this feature with more naturality. As the ranges started to become a little wider, trading for profit came back to life and the community was happy again. The long-term plans turned out exceptional: the company’s profit doesn’t seem to stop growing, the coin selling business is now almost nonexistent and apparently no one’s resisting against price ranges being in the game.

Even if someone was willing to Rutter’s card from you, you wouldn’t be able to sell it for more than 5k coins

What are they and what is their purpose?

Have you ever tried setting a start price lower than 300 coins for a gold player card? You can’t do that, can you? You’re not really allowed to define your own price for your cards freely, not anymore. There are restrictions. You may sell them, but only if the price matches the predetermined range every single card has. That means you can’t set a price below the minimum or above the maximum value. Obviously, the buyer will also have to face those limits. You will never be able to find a card being auctioned for a price that’s not within the predetermined price range.

There are price ranges for all cards in the game, including the players, staff, consumables and club items. According to whatever EA sees fit, some of these FIFA 20 price ranges can be adjusted throughout the game. However, mostly there will be standards. Which means that, for most cards, the price ranges are universal, so they tend to be the same on PC, XBox and PlayStation.

You don’t have to go anywhere else to learn about your card’s price range. Every time you list an item on the transfer market, you’ll see how much you can sell it for. These minimums and maximums are somewhat based on the price history of the item/player in question since the beginning of the implementation of price ranges, so they do follow the market’s tendencies.

It’s important to mention that FIFA 20 Price Ranges and Quick Sell Values are different things. The first one defines a range of values for which you may sell or buy a card. The second determines a single coin value which will be credited in your club in case you decide to permanently discard your card. This way, the base of a card’s price range will always be superior to its quick sell value. If that weren’t the case, most people would simply discard their least valuable cards instead of auctioning them, making the transfer market a much less interesting place.

According to EA themselves, price ranges help the Ultimate Team players perceive the market prices. That sounds valid for the beginners and the less experienced, because they learn about limits and what is a reasonable price to buy or sell a card for. Also according to the company, this feature decreases the big price differences there usually is among the best players of the game and the rest. Now that aspect is a bit more debatable since it would’ve only took EA to have stopped the massive coin farming that happened in the past so that today we wouldn’t have to face the consequences of such a devastating inflation. The big reason behind the implementation of price ranges is really the fight against coin sellers. Back then, when buying coins, you would only have to start an auction for any of your useless cards and set a price according to how many coins you bought, and let the seller know. Now, you need to sell multiple cards at their highest price and hope that EA doesn’t detect your activity (and there’s a good chance they will).

Price Ranges of All Cards

As we’ve already said, the price ranges vary by card. However, in the beginning of the game, cards with similar overall rating and category tend to have the same price ranges. As the market develops itself, EA will release some updates. Although they give much more attention to the most important cards of the game. For the remaining 95%, the FIFA 20 price ranges tend to stay pretty much the same during the entire season, so you can consult tables to learn about the patterns.

Price ranges weren’t designed to help the traders. It’s quite the opposite, really. People who have been playing Ultimate Team for a long time are well aware of how difficult the job has become. However, in difficult times there’re always new opportunities.

It is possible to use price ranges in order to make coins, and we’ll explain how. When the price of a card is experiencing a continuous increase it may eventually reach its maximum value. This is a great indication that the price range is not well adjusted and, therefore, EA will soon launch an update. In these situations, the only reason why the price didn’t keep increasing is because it wasn’t allowed to. This way, the cards with a PRP (Price Range Percentage) above 95% are seen as good investments, especially if the player has high rating or plays in a popular league. You’ll get your return as soon as EA update the FIFA 20 price ranges and the market starts to react to that.

However, you still have to be careful for this situation is not always valid. Just because EA will increase a price range, it doesn’t necessarily mean the card’s value will also increase. It’s only (almost) guaranteed for that to happen when the player’s price has already hit its maximum. Just like with any other trading method, this one also requires a learning/adaptation period, so don’t be expecting to make a lot of coins fast.