A young Thierry Henry rose to prominence at Monaco in 1996 where the then manager, Arsène Wenger, deployed him as a winger. Henry’s pace and skill was highly effective and he helped Monaco to the Ligue 1 title in 1996-97, and a few months later, the Trophée des Champions title.

Another successful season followed where Henry was part of the French 1998 FIFA World Cup™ winning squad. Despite being relatively unknown initially on the international stage, he finished the tournament as France’s top goal scorer with 3 goals. After an injury laden campaign in 2006-07, Henry moved to Spanish giant Barcelona in 2007 at a cost of €24 million. Henry was deployed mostly on the left whilst at Barcelona and enjoyed huge success in the 2008-09 season.

Playing in a deadly front 3 alongside Leo Messi and Samuel Eto’o, the trio set a then record 72 La Liga goals between them. Henry’s contributions also led Barcelona to a famous ‘sextuple’ as they won 6 different competitions in 2009. Thierry Henry had his greatest career success at Arsenal where he spent 8 years between 1999 and 2007. He surpassed Ian Wright to become Arsenal’s record goal-scorer in 2005 and lifted two Premier League trophies and two FA Cups.

Henry’s blistering pace and exceptional finishing made him one of the deadliest strikers in Premier League history and was the 5th all-time leading Premier League scorer as of 2017, despite only playing 8 full seasons in England. 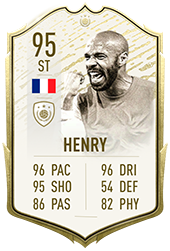