MORE ICONS
REAL LIFE
BIOGRAPHY
Sócrates de Oliveira (19 February 1954 – 4 December 2011), was a Brazilian footballer who played as an attacking midfielder. His medical degree and his political awareness earned him the nickname “Doctor Socrates”.

Easily recognizable for his beard and headband, Sócrates became the “symbol of cool for a whole generation of football supporters”. He was considered to be one of the greatest midfielders ever to play the game.
PERSONAL INFORMATION
Full name
Sócrates Brasileiro Sampaio de Souza Vieira de Oliveira

At the 1986 FIFA World Cup™, Sócrates and Brazil again had their eyes on the ultimate trophy. Known for his sublime intelligence and speciality of making no-look backheel passes, Sócrates brought marvellous flair to the game. He scored two goals in the tournament, the latter being his iconic no run-up penalty against Poland.

Brazil progressed to the quarter-finals and faced France in an epic encounter. The match was decided on penalties after ending 1-1, with Brazil losing out in the shootout.

Sócrates had his longest and most successful club spell at Corinthians. He won his third domestic title with them in 1983, scoring a goal in both legs of the final. With his intelligent style of play, Sócrates often eased past his opponents in an elegant fashion, despite his height.

Being a technical playmaker, he possessed a goal-scoring prowess and finished the season with 37 goals in 55 matches. His success was recognised in 1983, when he was crowned South American Footballer of the Year.

In 1982, Sócrates captained Brazil at the FIFA World Cup™. They eased through the group stage, with Sócrates scoring a memorable long shot against the Soviet Union. In the second round, Brazil faced Italy where they lost narrowly 3-2 and exited the tournament in an unforgettable match.

Sócrates finished the year on a high by winning the Campeonato Paulista with Corinthians, where he scored the winner in the first game and then helped his side go on to win the two-legged final. 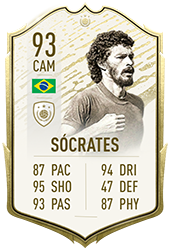