MORE ICONS
REAL LIFE
BIOGRAPHY
Ryan Giggs (born 29 November 1973) is a retired one-club man and Manchester United’s record appearance holder. As an exciting left-winger, Giggs made his debut for United in 1991 and had amassed an incredible total of 963 appearances during his illustrious career when he retired in 2014. Cardiff born Ryan Giggs established himself on the left-wing for Manchester United in 1992-93 and played a key role as they won the inaugural Premier League that season.

With his magical left foot, Giggs was quickly becoming the rising star at Manchester United and played a big part in their Premier League and FA Cup double in 1993-94. On the international front, Giggs scored his first senior goal for Wales in March 1993. Despite being into his early thirties, Ryan Giggs continued to set records for Manchester United. He scored his 100th league goal for the club in December 2007 and featured in 31 league games as United won the Premier League title. However, it was the Champions League final against Chelsea which was most memorable for Giggs. The late 1990s saw Ryan Giggs win many trophies with Manchester United. They won three consecutive Premier League titles, with the highlight undoubtedly being the 1998-99 season.

Giggs played a key role in their treble success, which saw them lift the Premier League, FA Cup and Champions League, with his assist helping United to European glory. This period also saw him score the most famous goal in his career, with a mazy run and finish against Arsenal in the FA Cup living long in the memory. 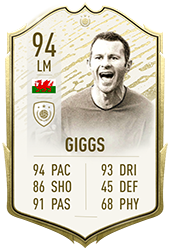