Ruud van Nistelrooy joined Hamburger SV in 2010 with a reputation as one of Europe’s all-time greatest goalscorers, having dominated leagues in the Netherlands, England and Spain. In the Bundesliga, the prolific Dutchman shone again, scoring match-winning hat-tricks and braces in both league and cup.

After leaving the German club in 2011 and moving back to Spain with Malaga, the legendary marksman announced his retirement in 2012, ending a glittering career. For the 2006-07 season, Ruud van Nistelrooy swapped Old Trafford for the Bernabéu, joining Real Madrid. The Dutch marksman scored a hat-trick in only his second league game, as his goal scoring exploits led to Los Blancos winning the league title on the final day.

For van Nistelrooy, this title triumph was capped off by him earning the Pichichi Trophy for LaLiga’s top scorer, in the process tying the record for the longest consecutive scoring streak of seven games. After a fantastic first season in 2001-02, winning the PFA Player’s Player of the Year award, Ruud van Nistelrooy continued to improve in 2002-03.

Finishing as the league’s top goal scorer, the Dutchman struck 13 goals in the final 8 games of the season to overcome an 8-point deficit and win the title for Manchester United. Van Nistelrooy’s supreme confidence and deadliness in front of goal for the Manchester club gives him the status as one of the Premier League’s all-time greatest goalscorers. 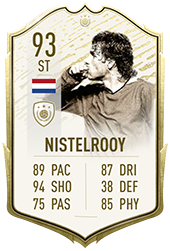