MORE ICONS
REAL LIFE
BIOGRAPHY
Ruud Gullit (born Rudi Dil, 1 September 1962) is a former Dutch midfielder. Gullit’s career peaked in the late 80’s when he was named European Footballer of the Year thanks to his exploits at PSV and later with Milan.

Equally famed for his flowing dreadlocks as he was for his unrivalled athletic ability, Gullit’s career highlight came in 1988 when he captained the Netherlands to their first major trophy as they won the European Championship that summer. He later ended his playing career by winning the FA Cup with Chelsea in 1997 as player-manager.
PERSONAL INFORMATION
Full name
Ruud Gullit Having spent 8 years in Italy, Ruud Gullit joined Premier League side Chelsea in July 1995. After an impressive first season, Gullit was promoted to the role of player-manager, becoming the first Dutchman to manage in the Premier League.

In 1997, in his dual role, Gullit led Chelsea to the FA Cup title – their first major trophy in 26 years. He was later quoted as saying that his time at Chelsea was the happiest time of his illustrious career. Ruud Gullit spent two years at PSV, having moved from Feyenoord in the summer of 1985. With his unique dreadlocked appearance, Gullit catapulted himself onto the world stage during his time in Eindhoven.

The Dutch side won the Eredivisie title in back-to-back successes in 1986 and 1987, with Gullit playing an integral role. He was named Dutch Footballer of the Year in 1986 and amassed 46 goals in 68 appearances before moving to AC Milan for a then world record fee. Ruud Gullit joined Milan in 1987 for a then world-record fee. He was a central figure in Milan’s period of domination, helping them to 3 Serie A titles, 2 European Cups and several other titles.

Gullit was named winner of the coveted Ballon d’Or in 1987 and was also runner up the following year. In total, he played 117 league matches for Milan, making it the longest spell at any club throughout his career. 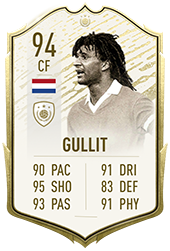