After travelling to the 1994 FIFA World Cup™ at just 17 years of age, Ronaldo joined Dutch side PSV where he dominated despite his young age. His speed, dribbling and finishing quickly led him to become the most sought after player in Europe.

After just two seasons in Holland, Ronaldo had won two cups with PSV and scored an incredible 54 goals in just 57 appearances. In 2002, Ronaldo travelled to Asia for the FIFA World Cup™ after a terrible run of injuries and lack of match practice. However, he defied his critics in stunning style as his eight goals not only led him to the Golden Ball, but with Ronaldo scoring twice in the 2-0 final win against Germany it ensured Brazil would win their fifth World Cup title.

Later that year he moved to Real Madrid for yet another world record fee and received his second Ballon d’Or soon after. In 1996, Barcelona paid a then world record fee of just under $20 million for the services of Ronaldo. It turned out to be money well spent as Ronaldo dominated on the European and domestic stages. Despite only one season at Barcelona, he scored a stunning 34 goals in 37 league games and won three trophies.

Another world record fee took Ronaldo to Inter Milan in 1997 and 6 months later he was named winner of the coveted Ballon d’Or. 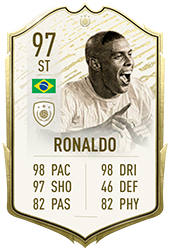