MORE ICONS
REAL LIFE
BIOGRAPHY
Roberto Baggio was born on 18 February 1967 in Caldogno, Italy. He was technically gifted, creative playmaker and a set piece specialist, renowned for his curling free-kicks, dribbling skills, and goalscoring. He was also known as Il Divin Codino (The Divine Ponytail), for the hairstyle he wore for most of his career, for his talent and for his Buddhist beliefs.

Baggio is the only Italian to score in three World Cups, and with nine goals holds the record for most goals scored in World Cup tournaments for Italy, along with Paolo Rossi and Christian Vieri. In 2002, Baggio became the first Italian player in over 50 years to score more than 300 career goals.
PERSONAL INFORMATION
Full name
Roberto Baggio At the age of 33, Roberto Baggio joined newly promoted Brescia in 2000, scoring 10 goals and claiming 10 assists in his first season, helping the club to their highest Serie A finish of 7th to qualify for the UEFA Intertoto Cup.

He remained with Brescia for a further three years, reaching double figures in each season to keep the club in Serie A. In his final campaign, Baggio scored his 200th Serie A goal in 2004, becoming the first player in almost 30 years to achieve the feat. Roberto Baggio enjoyed five seasons with Fiorentina in the late 1980s and became renowned for his excellent creativity and passing ability. In his final season for the club, Baggio finished the 1989-90 season with 17 goals and led the club to the 1990 UEFA Cup final where they finished runners-up to Juventus.

That summer, Baggio scored one of the goals of the tournament at the 1990 FIFA World Cup™, and his dazzling displays throughout the year earned Baggio a Ballon d’Or nomination. Roberto Baggio won his first piece of silverware by helping Juventus claim the 1993 UEFA Cup. His performances for club and country that year saw Baggio named as winner of the Ballon d’Or.

He enjoyed further success the following year, leading Italy to runners-up in the 1994 FIFA World Cup™, before a league and cup double with Juventus in 1994-95. Baggio joined Milan in the summer of 1995 and achieved further success in his first season, lifting the Serie A title for a second successive year. 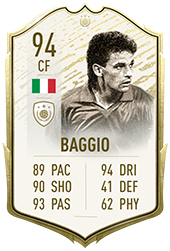