MORE ICONS
REAL LIFE
BIOGRAPHY
Robert Pirès (born 29 October 1973 in Reims) is a former French winger who was widely regarded as one of the best attacking midfielders of his generation. He boasts winners’ medals from both the World Cup in 1998 and the European Championships in 2000, where he famously provided the assist in the final which secured France the title on Golden Goals.

He is fondly remembered by Arsenal fans for his six year spell at the club which peaked with the team winning two Premier League titles in 2002 and 2004 – where Pirès was an integral member of Arsenal’s unbeaten ‘Invincibles’.
PERSONAL INFORMATION
Full name
Robert Emmanuel Pires

After joining Villarreal in May 2006, Robert Pirès went about proving that he could still be a force in European football. He didn’t disappoint during a four year stay which saw him switch to a central playmaker role.

The highlight during this period came when, in the 2007-08 season, Pirès helped Villarreal to their highest league position in history, finishing second ahead of giants Barcelona. After 6 successful seasons at Metz, where he had graduated through the academy, Robert Pirès moved to Olympique de Marseille for £5 million in 1998. In his two-season spell OM came agonisingly close to a double, missing the Ligue 1 title by one point and falling short in the UEFA Cup Final.

However, his performances for Marseille earned him a £6m move to Arsenal in 2000. Internationally, Pirès was part of France’s FIFA World Cup™ 1998 and Euro 2000 winning squads. Robert Pirès joined Arsenal in 2000 with big shoes to fill after Marc Overmars’ departure. However, his six season stay brought Pirès and Arsenal much success. They won the Premier League in 2001-02 and his performances on the left were a big part in Arsenal’s 2003-04 title-winning season in which they remained unbeaten and were dubbed the ‘Invincibles’. 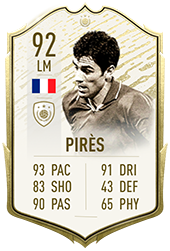