MORE ICONS
REAL LIFE
BIOGRAPHY
Rivaldo Ferreira (born 19 April 1972 in Recife) was one of the most skilful and creative players of his generation.

He was renowned for his bending free kicks, bicycle kicks, powerful ball striking from distance, and ability to both score and create goals. In 1999, he won the Ballon d’Or and was named FIFA World Player of the Year.
PERSONAL INFORMATION
Full name
Rivaldo Vítor Borba Ferreira After playing for Corinthians in 1993, Rivaldo’s career really kicked off at local rivals Palmeiras the following year. During his successful two years at the club, he scored 21 goals in 45 league games and helped Palmeiras retain their league title in his first season.

The same year, Rivaldo won the prestigious Bola de Prata award for the second year running. His performances helped Palmeiras win the Campeonato Paulista in both 1994 and 1996, before moving overseas to begin his European career. Rivaldo reached the peak of his international career at the 2002 FIFA World Cup™. Given an attacking playmaker role, Rivaldo was the link between Ronaldo and Ronaldinho, the deadly trio that tore up oppositions with their Joga Bonito.

He netted five goals during the tournament, amongst them a remarkable volley against Belgium. Rivaldo and Brazil went on to beat Germany 2-0 in the final, securing Brazil’s fifth FIFA World Cup™ trophy. He deservedly featured in FIFA’s World Cup All-Star team. Possessing excellent technique, Rivaldo was capable of playing in several offensive positions. As FC Barcelona’s unstoppable attacking threat, he became LaLiga top scorer in the 1998-99 season with 24 goals, leading them to their second consecutive league title.

In 1999, Rivaldo won the Copa América with Brazil and was named best player at the tournament, scoring two goals in the final vs. Uruguay. To cap an outstanding year, Rivaldo won the Ballon d’Or and was crowned FIFA World Player of the Year. 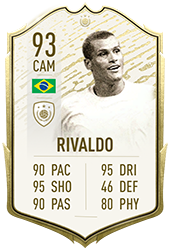