MORE ICONS
REAL LIFE
BIOGRAPHY
Rio Ferdinand (born 7 November 1978) is a retired English central defender. Ferdinand progressed through the youth ranks at West Ham and made his debut in 1996, before moving to Leeds in November 2000 for a then record £18 million.

After rapidly becoming one of the best defenders of his generation, Ferdinand once again broke the transfer record as he moved to Manchester United for just under £30 million. A technically gifted defender, Ferdinand helped United to 6 league titles and several cup successes in his 12 seasons at the club. He won 81 caps for England before retiring from football in May 2015.
PERSONAL INFORMATION
Full name
Rio Gavin Ferdinand Rio Ferdinand began his career at West Ham and quickly carved out a reputation as a classy, ball-playing centre back. Ferdinand became the world’s most expensive defender when he moved to Leeds United in November 2000. He spent two successful years with Leeds, becoming club captain in 2001.

Ferdinand’s international reputation also grew and he was one of England’s first choice centre backs at the 2002 FIFA World Cup™. Financially stricken Leeds sold Ferdinand to Manchester United for a British record one month later.

Rio Ferdinand was a key part of Manchester United’s success in the late 2000s and had formed a formidable centre back partnership with Nemanja Vidić in this period. Rio won 6 Premier League titles in his spell at United, but perhaps his greatest honour was captaining United in the 2007-08 Champions League final where they defeated English opponents Chelsea.

Ferdinand was named England’s captain for the 2010 World Cup, but unfortunately had to withdraw before the tournament began due to injury. During the mid-2000s, Rio Ferdinand had established himself as one of the world’s best defenders of his generation and was a key part of Manchester United’s success in this period. His first goal came in 2005 against Wigan and he scored a last-minute winner against rivals Liverpool in January 2006.

One year later, United won the Premier League – the first of three successive titles of which Ferdinand was an integral part. 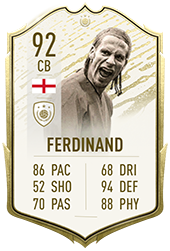