With a thunderous right foot and breathtaking passing ability, Scholes’ consistent performances for Manchester United cemented his place as one of the top Premier League players in history. Retired from international football in 2004 with 66 caps and 14 goals.
PERSONAL INFORMATION
Full name
Paul Scholes Paul Scholes was shortlisted for PFA Player of the Year in 2006-07 and was named in the PFA Team of the Season. He made his 100th Champions League appearance in 2008 before scoring the decisive goal against Barcelona in the semi-final of the competition, which United went on to win.

In September of the same year Scholes was inducted into the English Football Hall of Fame. Scholes is widely renowned as being one of the Premier League’s best ever central midfielders. As Manchester United won the Premier League 3 times between 1999 and 2003, Paul Scholes played in both the number 10 role and in central midfield. His excellent stamina and work rate, as well as a brilliant eye for a pass or goal meant he excelled in both positions. Paul Scholes made his breakthrough at Manchester United in the 1994-95 season, scoring 2 goals on his debut. He started out as a striker, scoring 14 goals in 1995-96 as United won the double, but he moved back to central midfield as he matured. In 1998-99, Scholes scored in the FA Cup final as United won the cup alongside the Premier League.

The season was capped off as United’s most successful in history with a dramatic Champions League final win over Bayern Munich to secure a historic treble. 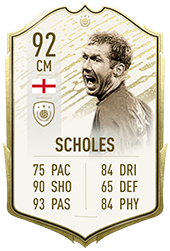