MORE ICONS
REAL LIFE
BIOGRAPHY
Patrick Vieira (born 23 June 1976 in Senegal) is considered one of the best central midfielders of the last 20 years. A tough tackling enforcer, Patrick’s football career is littered with glory that most players can only dream about.

As well as winning the World Cup in 1998 and European Championship in 2000 with France, Vieira won Serie A in Italy with 3 different clubs and was named in England’s PFA Team of the Year for six successive seasons as he helped Arsenal to 11 different trophies in his nine seasons with the club.
PERSONAL INFORMATION
Full name
Patrick Vieira In the summer of 2003, Patrick Vieira signed a new 4-year contract to end speculation around his future.

Despite a mixed start to the season, Arsenal’s form picked up significantly and they won the Premier League title after a 2-2 draw at rivals Tottenham Hotspur. Vieira and Arsenal then set their sights on an historic unbeaten season, and their famous ‘Invincibles’ status was confirmed with a 2-1 win over Leicester City on the final day, with Vieira scoring the winning goal. In August 1996, Patrick Vieira joined Arsenal from AC Milan for a fee of £3.5m. He quickly adapted to English football, utilising his physical prowess and technical ability in the heart of Arsenal’s midfield, and helped the club to their highest league finish in 6 years.

The following season, Vieira formed a formidable partnership with Emmanuel Petit to help Arsenal secure a league and cup double, before going on to win the 1998 FIFA World Cup™ with France. At the start of the 2001-02 season, Patrick Vieira was named as vice-captain to Tony Adams. After finishing runners-up to Manchester United for three consecutive seasons, Vieira and Arsenal finally toppled their rivals, with victory at Old Trafford in the penultimate game of the season.

This came just five days after Vieira helped Arsenal defeat Chelsea 2-0 in the FA Cup final for a league and cup double. At the end of the season, Vieira became club captain following Adams’ retirement. 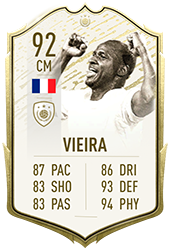