MORE ICONS
REAL LIFE
BIOGRAPHY
Paolo Maldini (born 26 June 1968 in Milan) is a retired Italian defender and regarded as one of the greatest Italian defenders of all time. Maldini was known for being a defender who had everything and famously spent an incredible twenty five consecutive seasons at his home-town club of Milan.

In total, Maldini won 26 titles and countless individual awards including runner up at the 1995 FIFA World Player of the Year awards. He went on to make the most appearances of any player in Serie A, and captained his country during an international career which saw him receive 126 caps. FIFA 19 Icons are stronger with him.
PERSONAL INFORMATION
Full name
Paolo Cesare Maldini Paolo Maldini rose through the ranks at Milan and quickly cemented his first-team place. Initially starting out at right-back before moving to left-back to complement his fantastic left foot, Maldini was part of one of the strongest defences in history.

During the 1987-88 season, Maldini won his first trophy with Milan in a dominant Serie A title win, during which they conceded just 14 goals all season. 1988 also saw him make his international debut for Italy, the first of 126 appearances. Paolo Maldini had become a legend with Milan by the early 2000s, having spent his entire career with the club after progressing from the youth setup. This period also saw Maldini lift further silverware as captain.

Milan won the Champions League title in 2002-03, with Maldini being named as man of the match in the win over Juventus. One season later, they also regained the Serie A title, finishing 11 points ahead of Roma and losing just two matches in the league all season. By the late 1990s, Paolo Maldini had made his name as one of the greatest centre-backs of his generation. His role at Milan had become increasingly important, and he was named club captain in 1997.

Two years later, under Maldini’s leadership Milan managed to win their 16th Serie A title, where they pipped Lazio to first place by one point. On the international front, Maldini captained his country during the 1998 FIFA World Cup™ in France, where they bowed out to the hosts on penalties. 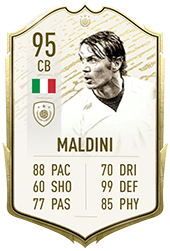