Klose is the top goalscorer in the history of the FIFA World Cup with 16 goals, having scored five goals in his debut World Cup in 2002 and having won the Golden Boot at the 2006 World Cup in Germany by again scoring five times. At club level, he won two league titles with Bayern, along with cup competitions at Bayern, Werder Bremen and Lazio.
PERSONAL INFORMATION
Full name
Miroslav Josef Klose He ended his international career shortly after, his 16 FIFA World Cup™ goals making him the competition’s all-time leading scorer. Miroslav Klose signed for Bayern Munich in the summer of 2007 and hit double figures in the two seasons that followed. The German marksman helped his side to an impressive Bundesliga and DFB-Pokal double in 2007-08, a feat they went on to repeat in 2009-10.

Following these domestic successes, Klose stepped up to the plate again at the 2010 FIFA World Cup™, netting another 4 goals to take his tally to 14 in the competition, and, cement his reputation as an all-time World Cup great. Miroslav Klose took the Bundesliga by storm in 2005-06. Playing for Werder Bremen, Klose ended the Bundesliga season as top scorer with 25 goals, as well as providing the highest number of assists.

Klose replicated his fine domestic form to shine on the international stage at the 2006 FIFA World Cup™, as his five goals earned him the Golden Boot award with Germany finishing the tournament in 3rd place. A spot in the All-star team followed and Klose was also named German Player of the Year. 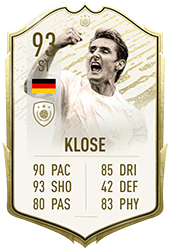