It was at Barcelona where Laudrup was part of one of the greatest teams in history, and his time there saw him impressively win four consecutive La Liga titles in the early 1990’s. Laudrup made 104 appearances for the Denmark national team and scored 37 goals.
PERSONAL INFORMATION
Full name
Michael Laudrup The Danish attacking midfielder’s first full season at Juventus saw him lift both the Serie A title and Intercontinental Cup trophies and voted the Danish Player of the Year for a second time, an achievement only bettered by 3 other players in history. Denmark’s first appearance at the FIFA World Cup™ came in Mexico 1986.

Laudrup’s Denmark topped the tournament’s “group of death”, his goal against Uruguay arguably one of the goals of the tournament. The great Dane joined the ranks of Los Blancos in the 1994-95 season. As one of the best passers of the ball of his generation, he provided many pivotal assists in their league championship winning season.

This accomplishment made him the only player ever to win La Liga five times in consecutive seasons while playing for two different clubs. In addition to his playing ability, Laudrup was known for his good conduct on the pitch having never received a red card throughout his career. The intelligent midfielder was soon winning medals with Johan Cruyff’s “Dream Team”, with back-to-back La Liga championships, a Spanish Super Cup title and a European Cup. A Champions Cup victory the same year, a 1-0 win against Sampdoria, was their first triumph in the competition, at the old Wembley Stadium, London.

The same year, Laudrup’s individual achievements were honoured as he was named the Foreign Player of the Year in Spain. 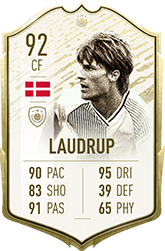