MORE ICONS
REAL LIFE
BIOGRAPHY
Marco van Basten (born on 31 October 1964 in Holland) is widely regarded as one of the greatest forwards of all time. Before injury cut short his career at the age of 28, van Basten won more accolades throughout his career than most players can dream of achieving.

As well as being a triple winner of the Ballon d’Or, van Basten’s career highlight came in 1988 when his spectacular volley in the European Championship final helped the Netherlands to their first major piece of silverware. His club career ended with a phenomenal record of 276 goals in just 373 appearances for Ajax and AC Milan.
PERSONAL INFORMATION
Full name
Marco van Basten Marco van Basten developed into a prolific striker at Ajax, scoring more than a goal a game in his final two league seasons for the club, and cementing his place as the league’s top scorer for four consecutive seasons.

He quickly earned a reputation as a clinical finisher, as well as the scorer of acrobatic goals. Firmly into his peak years, van Basten continued to show his class as AC Milan enjoyed a golden age in the club’s history. The Flying Dutchman enjoyed a prosperous 1991-92 season, becoming Serie A’s top marksman once again as Fabio Capello led Milan through an unbeaten league season, which they would eventually stretch to 58 matches.

Van Basten became a triple Ballon d’Or winner in 1992, only the third player at the time to have accomplished such a feat. 1988
Euro 1988 propelled van Basten to greatness. The striker had it all to prove after an injury-hit first season with AC Milan. He shot the Netherlands to their first international success with 5 goals, including a famous volley from an acute angle in the final to seal a 2-0 win.

Van Basten returned with the golden boot and player of the tournament awards to his name. His form continued in the following seasons, picking up consecutive Ballon d’Or awards as Milan won back-to-back European Cups. 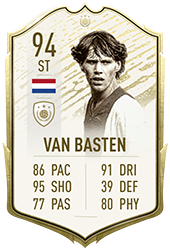